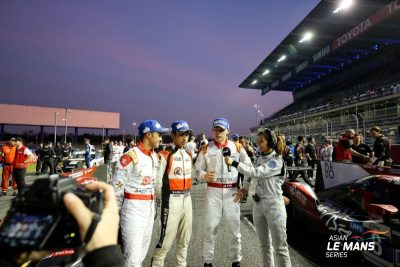 Full race and qualifying live streaming, and a bolstered broadcast programme the 2017/18 Asian Le Mans Series has delivered a 55% increase in coverage over the 2016/17 season. There was also an 81.3% increase in media value and 101.4% increase in the value generated for sponsors.

Final media analysis of the 2017/18 Asian Le Mans Series has shown significant growth in coverage from what was a record season in 2016/17.

With a growing supporter base, a significant broadcast programme including a growing Chinese media partnership, the Asian Le Mans Series has reinforced its position as the premier endurance racing series in Asia.

These results ensured unrivalled exposure for the teams, drivers and sponsors involved in the Series.

“It is positive to see such strong results driven by the hard work of the team. The coverage has taken a massive step forward, not only with regard to the reach, but also in terms of the quality of the broadcast – we are now delivering a world class broadcast programme for the Asian Le Mans Series.

“The flow on effect of booming coverage is the return we are able to offer to our partners, be they sponsors, or indeed the teams and drivers competing in the Series – they have received a significant increase in the value of their investments.

“We are in the final stages of finalising the details of the 2018/19 Asian Le Mans Series, and we expect to see further growth in the coverage of the Series, and in turn further value for all our stakeholders.”

Chinese Media Partnership:
Coverage of the Asian Le Mans Series in China received a significant boost this season with Tencent, the leading internet service company in China, signed as a media partner. Broadcasting all races live and featuring highlights packages and news stories through Tencent Sports network, this partnership helped grow interest and awareness of the sport in China.

In 2017 the market value of Tencent surpassed Facebook, and the company continues to be recognised as the world’s most valuable social network company. They have 85% mobile social market share and reach 90% overall social media users.

Online Media Coverage:
Online press and social media coverage of the Series was also high, with a significant increase in the media attending each race. The coverage generated online content that reached 565 million unique visitors.

There was also significant interest from Chinese media, with 22.6% of online articles coming from China.

Looking forward:
The 2018/19 Asian Le Mans Series is due to be launched shortly. The new season will once again see an outstanding broadcast programme, including the highly popular live streams of all qualifying sessions and the races. There will also be increased social media video content

The new season will also have expanded coverage throughout China including coverage in the MAXSPEED programme broadcast on the Sports QQ network.