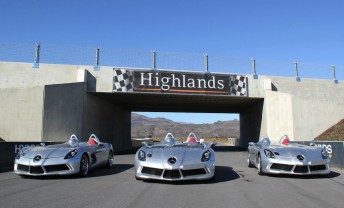 In what could become an ongoing arrangement with the cars’ owner, an Australian collector, the three Mercedes-Benz and the Ferrari add yet another level of prestige to the popular museum display which is enjoyed by hundreds of people each week.

Highlands’ general manager Mike Sentch says: “We’re very honoured to have this collector entrust some of his rare and exotic vehicles to Highlands Motorsport Park. With just 400 Enzo Ferraris ever made, it’s not often Kiwi automotive fans can see one of these incredible cars in New Zealand. And with only 75 of the Stirling Moss edition Mercedes-Benz McLaren SLRs ever made, to have three of them here at Highlands… well, it’s pretty special for our whole team to be able to share them with museum visitors.”

Sentch had the privilege of driving one of the Mercedes-Benz McLarens around the 4.1 kilometre Highlands circuit. 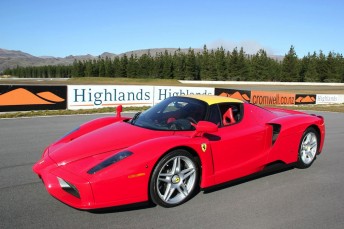 “It was hard to describe the feeling of driving this car around Highlands with its prestigious history and incredible performance. It’s likely that this is the only time that three examples of the Stirling Moss edition Mercedes-Benz McLaren SLR will ever be on display together in New Zealand so we hope car enthusiasts will take the opportunity to visit Highlands in the next few months to savour this sight.”

The Mercedes-Benz McLarens and the Enzo Ferrari join an ever-changing array of vehicles in the Highlands National Motorsport Museum. Among the most popular are the Benetton 191 Ford Cosworth Formula 1 car in which seven-time world F1 champion Michael Schumacher earned his first-ever points, and the UK-built Mosler MT900GT3, the only one of its kind in New Zealand.

The National Motorsport Museum – and all of Highlands Motorsport Park’s attractions – are open 10am to 4pm daily. More information is available on the venue’s website www.highlands.co.nz or Facebook page https://www.facebook.com/HighlandsMotorsportPark.