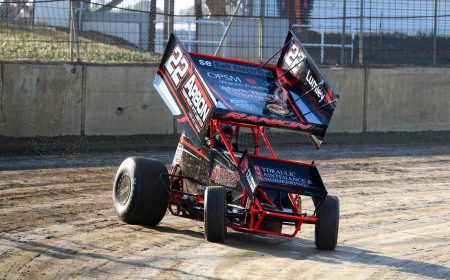 After joining forces prior to the beginning of the season, driver Terry Rankin and car owners Phil and Sharon Seymour are proving to be a combination that works, with Phil’s influence on Rankin as a 410 Sprintcar driver being greatly beneficial.

Previously contesting Junior Sedans and Formula 500s before following in his dad Rob’s footsteps by joining the Sprintcar ranks, with Rob having been one of the Victoria’s leading Sprintcar drivers throughout the 1990s, Rankin’s introduction to the Seymours and their PJS Motorsport team came during a cameo appearance in last season’s Tyson Perez Memorial.

What has been a largely positive season for Rankin and the PJS Motorsport team recently got a whole lot better, with the team scoring back-to-back podium results in the last two Eureka Garages & Sheds Series rounds at Geelong’s Avalon Raceway and Ballarat’s Redline Raceway, coming away with a pair of runner-up finishes.

“Like any team, we’ve had a few ups and downs throughout the season, but overall we’re really happy with how our first season together is progressing,” said the 24-year-old driver, whose first taste of Sprintcar racing was during two outings with the David Dickson Motorsport team in the 2016-17 season.

“Our last two podium results definitely have us feeling as though we’re going in the right direction, and being able to qualify towards the front of the feature-race field has been a big part of that.

With Rankin having purchased his own 410-powered Vic # 22 Maxim Sprintcar last season, completing about eight race meetings, the car also made an appearance during this season’s Grand Annual Classic at Warrnambool’s Premier Speedway, where Rankin impressively managed to qualify into Saturday night’s preliminary feature race, along with Sunday night’s Grand Annual Classic-deciding feature race – something his dad had never been able to achieve.

Currently sitting fifth in the Eureka Garages & Sheds point standings, Rankin and the PJS Motorsport team are preparing to contest the series grand final this Saturday night at Premier Speedway, which will also be their final outing together for the 2018-19 season.

“We’re going to need a consistent run this Saturday night in order to maintain our current top-five result in the series point standings,” Rankin added.

“No matter where we finish, I’ve really enjoyed being a part of the PJS Motorsport team this season and I can’t thank Phil and Sharon enough for allowing me to be. I’m excited to see what we can achieve together in future seasons.”

Following this Saturday night’s race meeting, Rankin and the PJS Motorsport team are looking forward to picking up where they left off next season.

Rankin would like to give special thanks to Phil and Sharon Seymour, David and Gayle Dickson, and his dad Rob Rankin.