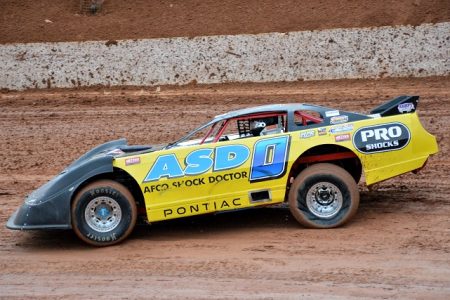 In what was an extremely entertaining exhibition of speedway sedan racing, Justin Randall secured his second Super Sedan feature race win for the season with a terrific drive to take out round 11 of the Brims Concrete Championship Series at Ausdeck Patios Archerfield Speedway on Saturday night (February 16). In the absence of series leader Matt Pascoe, it was Sean Black who carried the burden of favouritism into the event and he certainly looked the goods for much of the race but was unable to keep Randall at bay in the closing stages and had to settle for second. A great three-way scrap for the final spot on the podium eventually fell in favour of Tania Smith, leaving Wayne Randall and Ian Brims to fill fourth and fifth respectively.

Presented with an excellent track, the opening heat saw David Musch charge around the outside of Nicholas O’Keefe on lap three to take over lead before clearing away to finish more than three seconds clear of the field. Tony Brinkman advanced from fourth to finish second, with O’Keefe third home.

With a pole position start in heat two, Black was never seriously tested and romped home by more than seven seconds. It was much closer though for the minor placings with Bob McCosker clinching second spot by the merest of margins over Brims.

Wayne Randall also won from pole position in heat three, however he was hounded throughout by Brims, who started on the outside front row. In another strong run from Brinkman, he secured third on this occasion ahead of both Musch and Black.

The final heat produced the closest result with Justin Randall edging out Smith for the win, while David O’Keefe was third on this occasion.

The Pole Shootout commenced with both Justin and Wayne Randall advancing from the Bronze round to take on Black and Brinkman, whose night unfortunately ended at this point when he whacked the wall in turn one as Black and Wayne Randall moved forward to take on Brims and Musch. The final showdown saw Black emerge with the best time to secure pole position for the 30-lap feature race, although he would ultimately choose to start from the outside front row. Brims finished second quickest ahead of Randall and Musch, who started the feature race with a flurry before eventually falling out of the top five.

Black shot straight to the front at the start of the feature, only for David O’Keefe to wipe out in the main straight and halt proceedings before a lap could be completed. Black again got the jump and immediately settled mid-track as Musch also found a higher line to his liking, only for the race to be halted when David Mortimer spun in turn two. Upon resumption, Musch charged around the outside of Brims to take second spot and looked as though he would reel in Black in rapid time, only for Mortimer to spin again and trigger another restart, for which he was ordered to the infield. When racing resumed, Brims wasted no time in reclaiming second from Musch, who quickly found himself shuffled back several spots as Wayne Randall, Smith and Justin Randall moved ahead. With 10 laps down, Justin Randall had charged into second spot ahead of Brims, leaving his father to fight Smith for fourth. Out front, Black still looked comfortable at the halfway mark even though Randall Jnr was closing in. However, as lapped traffic became a factor, Randall zoomed into contention and the two leaders ran two-wide for several laps, with Black valiantly fighting back every time Randall edged ahead. However, Randall was able to secure the lead on lap 27, leaving Black to fend off a late surge from Smith, who had disposed of both Brims and Wayne Randall in a frantic finish. Brims would ultimately fall to fifth behind Randall Snr, with Musch sixth ahead of McCosker, who was the last car to finish on the lead lap. Dale Christensen, Dion Bennett and Ed Doherty rounded out the top ten, with Rodney Craft and Nicholas O’Keefe completing the finishers.

Following heat wins to Steve Price, Steve Potts, Tony Blanch and Thomas Vickery, the AMCA Nationals feature race only got as far as turn two before the latter, who had started on the front row alongside Nathan Durston, spun in turn two to send the field scattering and bring his race to an end. With Price also out of action for the restart, Durston zoomed into the lead and held the position for two laps until he threw it away with a spin in turn four. Potts took control from the ensuing restart and he never encountered much resistance from Blanch, who was likewise comfortable in second spot for the duration of the 25 laps. The battle for third was a much more intense affair as Dallas Czerwinski chased down Jim Knight to secure the final place on the podium as Durston stormed back through the field to finish fifth. Stuart Jefferies and Dan Evans were next best, followed by the remaining finishers in Michael Denning, Scott Hitchcock, Graeme Holland and Mark Brownsey.

Surviving a scare in the early laps when he rode a wheel in the main straight, Brant Chandler returned to his winning ways in the Wingless Sprint feature, rounding up Tim Harris on lap 14 to take the lead. In a terrific drive, Paul Robinson roared around the outside of Harris on lap 18 to grab second spot, leaving Harris third at the chequer. The other Tim Harris finished fourth, followed by Liam Atkinson, Ben Jennings, Mark Hughes and Bred Keller.

Terry Leerentveld proved unbeatable in the Modlite events, winning both heats and then taking control of the feature race when early leader Sam Gollschewsky headed infield. Nathan Politch and Dan Lewis filled the minor placings, with Joel Smith and Steve Collins the best of the rest.

Kynaston won all three heats of Ford vs Holden vs Sigma racing before also going on to take the feature in advance of Troy Price and Michael Laver.