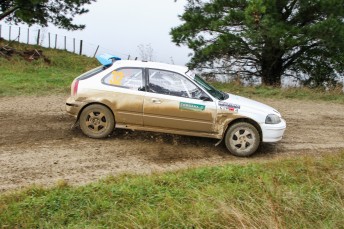 Tyson Jemmett showing his skill at the first round.
Pic: Jody Seabright

For the second consecutive time the competitors in the Total Lubricants Rally Xtreme Challenge will be tackling a new event to the series.

With the gravel roads of the Coromandel peninsular having not seen rally action since the 70s and 80s, the Vinz Goldrush Rally of Coromandel will be new territory for all.

That is with the possible exception of two veterans of the sport, Brian Green and Roger Goss. Meaning that the Ralliart Mitsubishi Motorsport sponsored round four will be a challenge for all on Saturday the 23rd August.

Centred round Whitianga, the course loops drivers to both sides of the peninsular over 9 special stages and 133km of competition.

Although Alex Kelsey lives in the area, there is in effect no real home advantage or prior experience to assist anyone.

Making for a competition where first up best dressed applies for the quickest driver to adapt to the conditions. Especially with the sprint nature of the event.

Being the penultimate event for the 2014 challenge the ability to gain a good points haul will be important.

With series leader Stewart Taylor not competing at this round his 34 point advantage will lost, especially as there is a 6 car line up all sitting within 10 points of each other, and all with the ability to make a stand out run for the series lead.

While Neil Marshall and Nigel Adams are on a high from their last results at their home event in Taranaki, Geof Argyle is looking to rid himself of the niggling problems that have dogged his season so far. However consistent results from Graham Featherstone, Quentin Palmer, and Carl Davies all year will mean that will likely be in the mix whatever happens.

Back from off road excursions at Rally Wairarapa are Lance Williams and Alex Kelsey. Both have shown turns of speed, and will be ones to watch for here. Combined with a return to the challenge by Phil Campbell, this trio have an ability to mix it at the front and rob points from the series leaders.

In the two wheel drive battle it is the hard charging Anthony Jones in his Escort who has the advantage, with Tyson Jemmett and Ric Chalmers not far behind.

However, Marcus van Klink and Max Bayley are likely to put a dent in their points deficit. At this event van Klink is back in his Group B Mazda RX7, and Bayley showed how potent he can be in his R2 Fiesta.

Bayley will also be eyeing up the points in the Te Rapa Automotive Junior class, but he will be playing catch up to Tyson Jemmett and Tyler Radovan. Both Jemmett and Radovan are in their first season of the Rally Xtreme Challenge and have shown a natural ability that has provided very good results.

However Bayley is still only in his second season and his step up to the Ford Fiesta has seen the teenager progress his career in leaps and bounds. This means it will be a tight battle to the finish for these up and coming drivers.