Rally veterans return with a cause

Rally veterans return with a cause 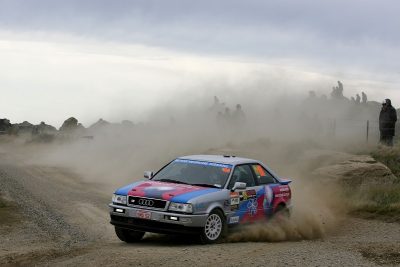 The Audi in action at this year’s Classic Rally Of Otago with Ray Wilson at the wheel pic: Euan Cameron

One of the big names of a great era in New Zealand rallying will be among the entries when the Catlins Coast Rally, organised by the Eastern Southland Car Club, takes place on Saturday 11 August.

Ray Wilson has had a long and successful rallying career and will start his first ever Catlins Rally in a car that carries a poignant message and was built in memory of a good friend and fellow competitor – Malcolm Stewart.

Wilson and Stewart both competed at the top level at the same time but sadly Malcolm died in 2009 from a form of motor neurone disease. Stewart’s most famous car was a Group B Audi Quattro which is now owned by Allan Wills and resides at Oamaru Auto Collection. Not long after Malcolm died wife Sue purchased a 1986 Audi Quattro for $5000 on Trade Me. This was run for a couple of years as a normally aspirated 2200 litre Quattro. The old crew prepared it and Wilson was invited to drive it. Then the decision was made to ‘step up’ and the team purchased a S2 Quattro Coupe and prepared that. “The car is similar to the Schmidt Motorsport Group N car that Malcolm drove at Rally New Zealand in 1993.

The bold signage carries the message of motor neurone disease and neurological disorders especially to raise awareness. I call it reverse sponsorship,” says Ray. “We sponsor them. If people ask about the disorders we refer them to the appropriate people or websites. At almost every rally someone with family affected by neurological issues comes and talks to us so it has definitely had a big impact. That was Sue’s prime reason behind the car and everyone on team thought it was a great idea.” This included Mike Fletcher, Malcolm’s long time co-driver who has been sitting alongside Ray in the S2 for most rallies up until his death last year from cancer. So the car is now a tribute to two of NZ’s most important rally people.

Another of Stewart’s former co-drivers, Doug Parkhill, is in the co-driver seat for Catlins – his third time in the car. “Both Doug and I wanted to do Catlins and personally I have never been in a position to do it before. I have driven the lead car for the Silver Fern Rally over some roads in the area but that is all. It will be quite an adventure and I am looking forward to it. John Silcock has been providing a base for the car in the South Island and this allows us to do these events and of course the Stewart Motorsport Team enjoys the challenge of rallies we haven’t done before.”

Malcolm Stewart is remembered as one of this country’s best rally exponents and Wilson too has had a successful career since starting out in motorsport in a Mini. “I did a lot of car club stuff, autocross and the like, before someone convinced us to do a rally in our fearsomely powerful 850cc Mini. I think it was the 1973 Reidrubber GT Rally.” Wilson competed in a number of Mini’s until 1981. “We entered the famous South Island Motogard Rally in 1981. It was a foolish decision, the last place you should have taken a Mini. It was time to change to something more competitive,” he laughs.

That more competitive car was a 1300cc Starlet. “It was remarkably successful,” recalls Ray. “We won our class in three consecutive Rally New Zealand’s which was great considering we were up against the likes of Paul Adams and Dave Strong who had bigger budgets than us. Toyota used to put up prizemoney and that suited our consistency. It would be great to have incentives for the smaller cars to encourage them and younger drivers these days.”

When the time came to change again Mazda’s were coming to the fore and having given Ray a good deal, what followed was a very successful period. “We never really did a whole NZ Rally Championship as we concentrated on Rally NZ and success in the late 80’s took us to Malaysia and Perth. I managed to finish second in the 1988 Asia – Pacific Championship, the first year it was held and had the privilege to run the first ever GTX Mazda in the Perth World Rally Championship round in 1990. We carried on with Mazda’s until 1992. After that came a quiet period with a daughter coming along. I got roped into helping overseas teams when they came here for Rally NZ, which led to the business of developing, servicing and building more cars, specialising in Subaru’s. We have done that now on and off for over twenty years. We don’t have a huge number of clients but in recent years we have sent cars to New Caledonia and Vanuatu.”

The Catlins Coast Rally takes place on Saturday 11 August and will begin from Owaka Motors Campbell Street, Owaka at 10am. Competitors will tackle six high speed Special Stages over a total of 150 kilometres before the event concludes in Owaka at 3.44pm. The rally is Round 6 of the Mainland Rally Championship and part of the Eastern Southland Car Club Rally Championship.