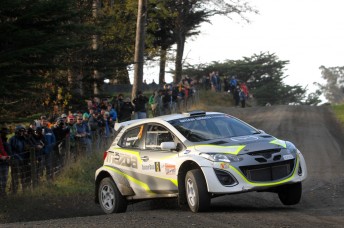 The 2015 NZ Rally Championship will be contested over six events on the best gravel rally roads across the nation. Pic: Euan Cameron

The 2015 New Zealand Rally Championship will be contested over six events on the best gravel rally roads across the nation.

The 2015 New Zealand Rally Championship is set to be contested over six rounds taking in the best rally roads in the country with announcement this week of the 2015 series calendar.

Northland, Otago, Canterbury, Gisborne, Coromandel and Wairarapa will host rounds of the 2015 Rally Championship, providing a challenging and exciting mix of events across the nation.

The opening round of the championship will again be the International Rally of Whangarei over the weekend of 18 – 19 April.

The event which doubles as a round of the FIA Asia Pacific Rally will be held over the fast flowing Northland roads that are widely regarded by drivers as among the best gravel roads in the world.

Having previously been used during the 1980’s, 90’s and 2000’s by the New Zealand round of the World Rally Championship.

The Rally Whangarei organisers are planning to again incorporate new stages to the north of Whangarei used last year, along with retaining the traditional favourites from previous international events including a possible 50 kilometre monster stage on Sunday morning.

The championship heads to the deep south for round two, with Dunedin hosting Rally Otago on May 9-10th. Incorporating the ever popular International Classic Rally, the Dunedin based event is a favourite on the calendar with its mix of public road and forest stages over two legs of competition.

Round three at Queen’s Birthday weekend is the Autosport Canterbury Rally based from Christchurch.

The Canterbury plains and foothills of the Southern Alps will be the battleground for competitors in the national championship.

Wintry conditions were a feature of the 2014 event with night stages and ice adding to the challenge for the countries best rally drivers.
Gisborne returns to the calendar for the 2015 championship on 27th June.

The gravel roads winding through the East Coast farmland gained their tough but rewarding reputation during the 1980’s & 90’s as part of Rally New Zealand.

Round five is the Gold Rush Rally of Coromandel based from Whitianga on August 22nd. A new addition to the championship in 2014, the event proved popular with competitors and rally fans.

Challenging stages in the Coromandel ranges including Castlerock, Tapu-Coroglen and The 309 providing a real contrast to the picturesque coastline of the host venue.

The championship finale will be held on the first weekend in October at Rally Wairarapa. The flowing roads in the rolling hills of the Wairarapa District have been the scene of many a championship duel, and provide a fitting location for the conclusion of the title race.

“The calendar provides both competitors and fans with arguably the best rally roads in the country and early interest in the 2015 NZRC indicates a number of exciting new cars and drivers will be in action on the stages.”

Along with the New Zealand Rally Championship travelling the length and breadth of the nation, the championship organisers are promising continued development of their online coverage and Live Video Streaming of events, providing rally fans with ever greater coverage and access to the events as they unfold.