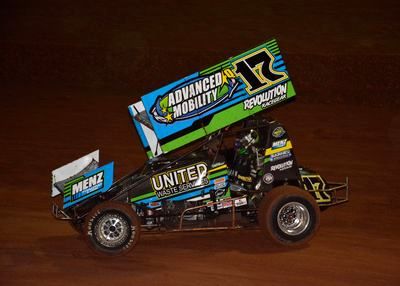 Despite the very best efforts of track promoter John Kelly in finessing the track back into shape after an early rain interruption, the arrival of more rain ultimately forced the abandonment of round ten of the East Coast Logistics Sprintcar Track Championship at Archerfield Speedway on Saturday night (March 20). It was an unfortunate end to what was shaping as a great night of racing that was to include the annual twin feature race format in which Sprintcar competitors contest two 20-lap feature races to determine the overall round winner.

In very slippery conditions and with light rain falling, Holden vs Ford Vs Holden competitors did a marvellous job in their opening heat race when they dished up a display that was much more enthralling than might have been expected under the circumstances. Racing three wide at times and swapping spots whilst also battling the worsening conditions, Maverick Dack emerged the winner over Terry Russell, who surged under Kim Dack exiting the final turn to win the sprint to the chequer.

A delay of about 45 minutes ensued at this point before racing resumed with the first Open Sedan heat race. Robin Bains piloted his Late Model to victory in the A Grade ranks over a collective of Super Sedans of varying vintage, while the B Grade spoils went to Ricky Price.

Jamie Usher prevailed in the solitary heat of Wingless Sprint action, finishing ahead of Lachlan Robertson and Brett Russo.

Likewise, Formula 500s only completed one heat in round six of their Done Right Paint Worx Series and it was James Kennedy who proved too pacey for his rivals, downing Liam Williams and Ryan Newton.

Two heats of racing were completed in round seven of the Shock Absorber Therapy AMCA Nationals Track Championship and it was Bruce Marshall who chased down Stephen Ward and then skipped clear of the field to win the first encounter. Despite plenty of pressure from Graeme Holland and Steve Price, Ward held on to remain second at the flag. Heat two went to Steve Potts in advance of Paul Reeves and Nathan Tomkins.

The Sprintcar field included a couple of NSW-based drivers who had fled the flooding of their home state, only to be met with more inclement weather north of the border. When cars hit the track for their combined hot lap/time trial sessions, only two groups had completed their laps against the clock (from which Luke Oldfield emerged quickest with a best lap of 12.089) before rain swept across the complex once again and rendered the track too precarious for any further competition.

The next event at Archerfield Speedway is on Saturday, April 3 featuring round two of the Easter Sprintcar Tri-Series and round nine of the TFH Midget Series, plus Wingless Sprints and Lightning Sprints.