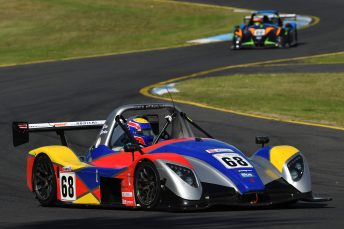 The 2017 Radical Australia Cup [RAC] will reach the midpoint of the season this weekend at the iconic Phillip Island Grand Prix circuit on Victoria’s south coast, a venue renowned for testing and often unforgiving conditions at this time of year, but whilst mother nature will certainly play a hand in this weekend’s event, the most unforgiving condition the teams will face will come in the shape of reigning champion Peter Paddon.

Paddon has so far dominated the 2017 RAC season, and four rounds in he remains undefeated – even when forced to start rear of field, and in conditions ranging from pleasant to downright miserable! So far no one has been able to weather the Paddon storm, and if history is any guide, Phillip Island could well provide little additional challenge for the two-time champion as he is the current lap record holder in a Radical SR3 in both qualifying and race trim!

Across the last two seasons, Paddon has been beaten only twice (he made the podium though on both occasions) in five races at Phillip Island, once by Oliver Smith in 2016 and once by fellow SR3 driver Kim Burke during a sprint race in 2015 – both those drivers will be in the field this weekend, and both will be powered by the impressive new Radical SR3RSX.

Already the new 2017 ‘long-stroke’ Hyabusa powered RSX has proven to be faster on circuits where both power and aero are rewarded, and whilst Sandown provided the teams an opportunity to compete at a venue with two of the fastest straights in Australia, the weather for the second event of the season prevented any real opportunity to take advantage of the performance of the new car.

Frustratingly for Smith, Burke, Tony Haggarty and Rowan Ross – the four RSX pilots might be faced again with testing weather conditions on arguably Australia’s fastest circuit, with Phillip Island likely to deliver a whole range of seasons across the event, a hallmark of competing at the southern venue on the eve of winter.

Should conditions remain dry though, expect Paddon to face his biggest challenge yet, and title rivals Smith and Burke are the ones expected to deliver it.

David Crampton comes into the Phillip Island round third in championship points, the strongest position the Vantage Freight driver has ever been in this early in the championship, and whilst he was expected to challenge for the top step of the podium this weekend in his new 2017 RSX, the Sydney-sider will return to his previous SR3RS this weekend after a setback in Sydney late last month.

Competing in the SuperSport Series at Sydney Motorsport Park, Crampton’s car was involved in a high speed turn one incident with local driver Brad Neilson, suffering quite heavy damage to the rear of his new car, and whilst the team are repairing the car – and it will be back to it’s pristine best for the fourth event of the season – Crampton will use his incumbent SR3RS this weekend.

Michael Shaw – a former race winner and front-runner in Radical Australia Cup – will return to the field this weekend for the first time this season, and could provide Paddon with his strongest challenge yet. Three years ago at Phillip Island, Shaw was amongst the SR3 standouts at the May Phillip Island round, claiming pole in Q1 for the category before taking two wins for the weekend, and a third behind Peter Johnston and Kim Burke.

Peter Johnston is another who is expected to compete for a podium this weekend after a strong – but testing – season debut at Mount Panorama. The PJSAIR SR3RS qualified third at Bathurst and was well positioned to attack in the second race after finishing fourth in the season opener, but he was eliminated in an opening lap off on top of the mountain whilst battling for third. He missed Sandown, but will rejoin the field this weekend, as will Greg Kenny in his SR3RS and former RAC regular Gary Walker in the P.J.C SR3RS.

There are a few absences too from the field, with business commitments affecting the title challenges of Simon Haggarty, Simone Meade, Greg Smith and Bill Medland, robbing the category of one of the biggest RAC fields in recent seasons, but the quality of racing is not expected to be affected given the depth of talent in the field.

Teams will get their first chance to circulate the Phillip Island circuit in anger on Friday, 26 May, with three 20-minute practice sessions scheduled across the day, whilst Saturday will see two 15-minute qualifying sessions ahead of the opening race at 12:30pm, and then race two at 9:50am on Sunday.

Sunday’s race will be streamed live via the CAMS Australian Nationals website;
http://www.thenationals.com.au with live timing available through; http://racing.natsoft.com.au/results/