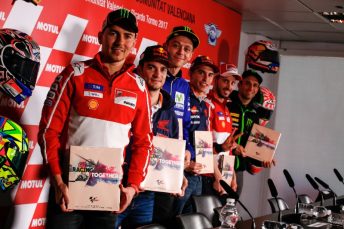 The long-awaited story of the FIM MotoGP™ World Championship, Racing Together 1949-2016 is now available for pre-order online through Evro Publishing. Commemorating 25 years of the collaboration between FIM, IRTA, the MSMA and Dorna working together to bring fans the Championship that it is today, ‘Racing Together 1949-2016’ tells the story of MotoGP™ from its humble beginnings in 1949 to the incredible technological sophistication and racing that we see today. Packed full of photos from the past and the present to celebrate the best of every era – and a myriad of racing memories – the book tells the vibrant story of MotoGP™ in a way that will capture the imagination of both those involved in the sport professionally and that of the millions of racing fans worldwide.

The book emphasises the past 25 years of racing and the role of Dorna in the commercial success of the Championship, as well as the new direction it has taken towards the harmonious relationship between the FIM, IRTA, the MSMA and Dorna at the core of the sport today. With forewords by Vito Ippolito (FIM President), Carmelo Ezpeleta (Dorna CEO) and Hervé Poncharal (IRTA President), Racing Together 1949-2016 gives unrivaled perspective and access to every element that makes the FIM MotoGP World Championship tick.

Technical perspectives are written by Kevin Cameron, the Dorna Story is written by Dennis Noyes and the detailed sporting chapters covering the last 25 years of racing – compiled by Nick Harris – are written by current MotoGP™ journalists from around the world, each with a different perspective to capture the essence of our sport and each nation represented.