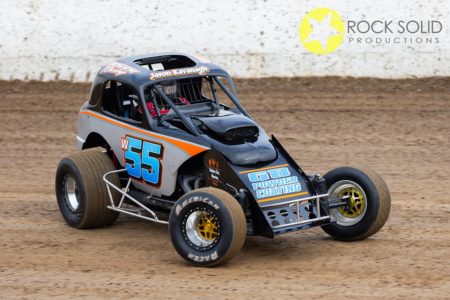 This Saturday night Redline Raceway returns to entertain with the return of the popular Super Rods as they hold round one of a mini series joining top billing with the Australian Motor Contest Association of Victoria who will be holding the latest round of their Action series. Supporting the two eight cylinder powered classes will be the Street Stocks and Junior Sedans.

In the Amca Nationals class the popular battle between Dean Heseltine and Tim Reidy will resume. The last few seasons the two of them have traded wins at Redline Raceway between themselves. Whilst the little battle is furious on track and the banter funny off track, on paper the field looks like the best possible chance for the narrative to be change, and a new winner crowned.

Expect Frank Thierry a winner this season at Nyora, Kent Davey, Hugene Charvat, Paul Howard, Paul Sullivan, Grant Cullinger, Stewart Grant = Campbell and Justin Richardson who won at Wangaratta to figure in the push for victory come final time. Mathew Smith from Tasmania is also in town, and we do have a history at Redline of Tasmanian’s taking a win.

It has been a little whilst since the popular Super Rods had been on Redline Raceway and the track has been banked quite differently since they were last on the Mount. The purpose-built chassis open wheel cars run with a fibreglass Sedan body on the outside of the chassis. They are powered by various eight-cylinder engines and produce a unique back it in style through the corners. Watch for Jamie May, Jason Kavanagh, Stan Marco Snr and Jnr, Paul Verhoeven, Dane Court, and the returning Andrew Howard to be just some of the entrants forcing the pace at the head of the pack.

In the Street Stock action the drivers are very keen after having a couple of race dates cancelled out of their control. Dean Jenkins, Leigh Bourke, Aaron White, Jayden Blomeley, Scott Purdie, and Tyler Barton are just some of the expected front runners in this line-up keen to get the first win of the season in the Street Stocks at Redline.

Junior Sedans will also be in action with both the Top Stars and New Stars graded competitors. In Top Stars drivers such as Jacob Tinworth, Blake Glynn, Dylan Barrow, Christine and James Oliver and Fletcher Barron could be drivers to keep an eye on, Barrow in particular has numerous wins in various sedan classes he competes in already this season.

For the New Star Juniors Tristan Jarred won this past weekend at Nyora with Pary Das in second and are two drivers to watch whilst Tayla Whatmore was second at Avalon, however Avalon winner Jake Bradley has been very good this season and is the pre-event favourite.

Gates to the public will open at 2pm with racing from 4.30pm approximately.