MEDIA RELEASE: More than 40 of Australia’s top club-level motorsport teams are preparing to fight for victory at Winton’s marquee endurance racing event, the Valvoline Winton 300, which will be held this weekend.

The Winton 300 was one of Australia’s most popular endurance racing events in the 1980s and early 1990s, and since it was resurrected in 2011 it has again attracted huge fields, and produced some enthralling contests including the epic 2014 edition, which came down to the 100th and final lap.

This year’s Winton 300 has attracted a quality field including no less than seven former winners: defending Champions Steve and Jake Shelley are back to defend their title aboard their Deputy.com Lotus Elise, but they will face stiff competition from 2014 winner Nathan Jess, who will be joined by talented Formula Vee racer Ryan Reynolds aboard his Canberra Hydraulics Future Racer.

2013 winners Nick Cancian and Rob Hay have reunited in their turbocharged Mazda MX5, which is expected to be a competitive package, while also in a competitive Future Racer is 2012 winner Chad Cotton, who will again be joined by Jase Collins. 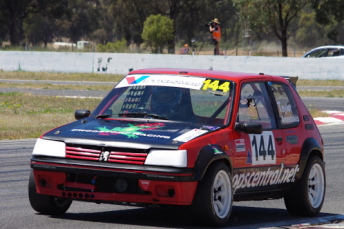 A number of cars will also contend strongly for division wins including the Peugeot 205 GTI of Parry Anastakis/Roland Rohrle. pic: Judi McDonald

Rounding out the list of former winners on the entry list is David Raddatz, who will be aiming for a division win alongside his son Zac in a Mazda 3.

There are plenty of other competitive outfits as well, including the Ginetta G50 of Adam/Craig Burgess which was victorious in the sister event to the Winton 300, the Valvoline Wakefield 300, earlier in the year.

Aiming for redemption this weekend will be the Lotus Elise of Glenn Townsend/Anthony Soole and BMW of Andrew Butcher/Lachlan McBrien after both cars were eliminated in a spectacular crash on the opening lap of last year’s race.

There are several dark horses which could spring an upset result as well including former Formula Vee Australian Champions Daniel Reynolds/Matt Stubbs (BMW M3), Daniel Kapetanovic/Daniel Sugden (BMW 328i) and Daniel Deckers/Luke Otten (Mazda MX5), along with the most-capped driver in the Winton 300, Daniel Flanagan who will be joined by Damian Lomax in a Nissan 180SX.

One of the main attractions of the Winton 300 is its division structure which allows a wide variety of cars to compete on a level playing field, and a number of strong division contenders appear on the entry list including the Peugeot 205 GTI of Parry Anastakis/Roland Rohrle, and Nissan Pulsar of talented young racer Jack Winter, who will be partnered with the experienced Phil Alexander.

There are even some Hyundai Excels from the popular one-make series entered, including Andrew Clarke/Matt MacKelden, Ross Donaldson/Glenn Coutinho and Gavin Stubbs/Nathan Bell.

The Winton 300 will be supported by the Super TT/Production TT category which will stage a 25-lap mini endurance race, with a $500 voucher up for grabs thanks to Nankang Tyres. The Alfa Romeo Challenge is also on the support program.

The official charity beneficiary for this year’s Winton 300 is Cancer Council Victoria, with $10 from each race entry being donated to the worthy organisation.

Tickets are available at the gate for $20 per day or $35 for a two-day pass; children under 16 are free and camping is also available.

Steve/Jake Shelley (Lotus) and Nathan Jess/Ryan Reynolds (Future Racer) will be two of the main outright contenders in this year’s Valvoline Winton 300.
(click for high-res, please credit to Judi McDonald)