RaceFuels, the respected distributor of racing fuels to the Australian motorsport industry, has expanded its footprint and is now supplying the New Zealand racing market with its own E85 fuel blend. 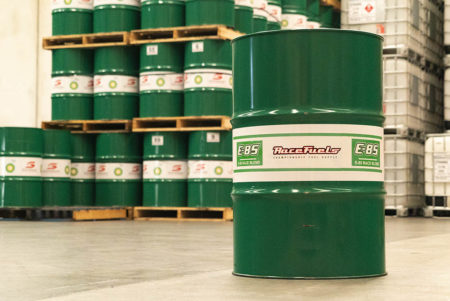 Produced in Dandenong South, Melbourne, RaceBlend E85 is warehoused in Auckland and available to all New Zealand-based race teams with next day delivery within the Auckland metro area.

The RaceBlend E85 is the same blend that is used in the Australian motorsport market, with every batch containing exactly 15 percent 98 RON petrol, consistency from batch to batch and drum to drum is tightly controlled through testing before, during and after production.

Drums are now in stock, with a 200 litre drum being the minimum order, and an immediate bulk discount for 4 x 200 litre drums that are delivered on a pallet.

Freight options are available for those outside of the Auckland metro area.

RaceFuels is the leading racing fuel supplier for all levels of Australian motorsport and has been the control fuel supplier to the Supercars Championship since 2012.

The all-Australian company also delivers and supplies racing fuels to all of the Australian support categories on the Supercars Championship and Shannons Motorsport Australia Championships, plus state and club level circuit competition.

“It is great that we have been able to introduce our RaceBlend E85 into the New Zealand market,” said Tierney.

“In recent months, there has been a void of supply of the product, and it’s great that we have been able to meet the required demand for the fuel.

“The RaceBlend E85 is all all-Australian product, produced in Melbourne and distributed from our factory.

“We have extensive experience with E85, having looked after the Supercars Championship, Super2 and Super3 for the past eight years. The Supercars exclusively uses E85, and now that we are creating the blend in-house, we have the confidence that the product is compliant and quality controlled.”