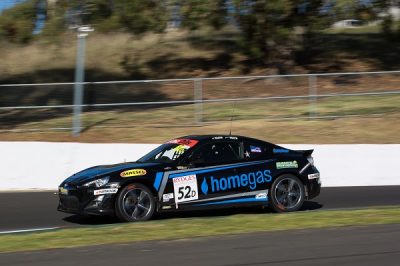 Last year, the Phil Alexander-owned operation campaigned a single entry for the father-and-son team of Graeme and Josh Heath; this year, they will also provide technical services for the Reynolds Auctions Toyota 86, to be driven by Gavan Reynolds, Chris Manning and Declan Fraser.

Josh Heath was one of the standouts in last year’s 6 Hour, leading Class D for much of the race and running as high as fifth outright at one stage.

“It was scary at first, but turned out to be one of the best experiences of my life,” Heath said.

“Dad and Phil were telling me about the blind corners and the steep sections of the track, but you don’t appreciate it until you actually race there yourself.

“For this year, I’m going to be a lot more confident now I know my way around the track, and we’ve made some tweaks to the car to make it easier to drive and more reliable.

“Having someone like Phil working with us is really valuable – he’s an excellent mechanic but his racing knowledge is just brilliant because of the amount of racing he’s done.”

According to Alexander, himself an accomplished racer in numerous endurance events at Bathurst, overseeing two cars only adds to the fun.

“The two cars might be basically the same, but they’re driven by people with completely different experience levels and objectives,” Alexander said.

“Graeme and Josh have been very close family friends for a long time, and they certainly know what they’re doing when it comes to endurance racing.

“Josh has come on in leaps and bounds in the NSW APRA (Pulsar) Series. He was extremely close to winning the championship last year and was dominant in the long-distance races – he’s always been excellent at punching out consistent laps over the course of a stint.

“On the other hand, Gavan and Chris are fairly new to racing and Declan is still finding his feet in the Toyota 86 Racing Series.

“They’ve been doing some driver development sessions at some of our RaceAway track days, and both Gavan and Chris leased our Pulsars for a couple of race meetings as well, to get themselves more comfortable with wheel-to-wheel racing.

“Gavan and Chris are both very passionate about the sport, and they are dedicated to learning and improving. Declan is still very young, and for him it’s all about gaining seat time – doing a big endurance race like the Bathurst 6 Hour will teach him about strategy, and about teamwork.”

The Bathurst 6 Hour will be the sixth-consecutive weekend in which RaceAway Track Time has run cars in a racing event, having also campaigned entries in two rounds of the NSW APRA Series at Wakefield Park, the opening round of the Victorian APRA Series at Sandown, the first round of the new Mazda RX8 Cup Series at Winton and the NSW Production Touring Car Championship at Sydney Motorsport Park.

“All these weekends of race meetings have made it extremely busy in RaceAway land, but at the same time very satisfying,” Alexander said.

“We’re all about making it easy for people to participate in motorsport, especially if they don’t have the logistics or mechanical expertise to run cars themselves, and it’s so rewarding to give people the opportunity to go racing, especially in big events like the 6 Hour.”