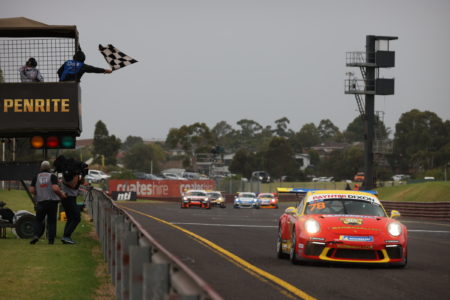 Sonic Motor Racing has proven it is a contender for Porsche Carrera Cup Australia this year, taking a race win and an overall podium in the opening round of the championship at Sandown this weekend.

Also, returning team recruit Simon Fallon showed that it won’t be long until he rekindles the form that took him to the 2018 Porsche Sprint title.

Almond started the weekend in scintillating form on Saturday, qualifying second around the famous 3.1km suburban Melbourne circuit, and capitalised on a first corner mistake from pole-sitter Harri Jones to take a lead he would not surrender.

On Sunday, Melbourne’s rain arrived, making for tricky conditions on the fast layout. Almond slid back through the field to eventually finish 12th in Race 2, before enduring a huge spin in Race 3, but fighting back to an impressive seventh place. Almond’s weekend efforts have netted him sixth place outright in the championship standings.

Aaron Love was a model of consistency, qualifying fourth and finishing with two fourths and a third place, earning him second overall.

The results didn’t come without their dramas through, especially in the wet weather races with a number of hard fought battles with the likes of Craig Lowndes and Dale Wood.

The second Bob Jane T-Marts Porsche entry of Fallon had a tough initiation in his first-ever round of Carrera Cup competition, but by the final race, was punching inside the top 10 and looking strong.

Fallon, the former Porsche Sprint Cup champion, qualified 15th and progressed to 14th and 13th in the first two races. In Sunday’s last race, he ran as high a seventh, only to suffer steering damage after he collided with another car that was re-entering the circuit from their own spin.

The next round of the 2021 Porsche Carrera Cup Australia will be held at The Bend Motorsport Park in South Australia on May 8-9.

“It was a pretty positive weekend, and certainly a lot of things that we can move forward both in the car and in myself,” said Love.

“We managed to snag second for the round, so leading into the rest of the year, we can build on this.

“There’s certainly a couple of things to learn from. We were a bit too sloppy in some areas in the wet races, but nothing we can’t build on and we’re really looking forward to the rest of the year.”

“Taking the win in the first race was amazing and very exciting,” said Almond.

“I found my feet early in the race, got into a rhythm and maintained the gap and I couldn’t be more grateful to the team for the result.

“I struggled with the car in the rain and went backwards pretty quickly, but I tuned the car and myself up for the last race and we got the most out of it.

“I still made a few mistakes and gave away a few points, but I scored points in all three races which I haven’t done for a while, so eyes forward from here.”

“It wasn’t the best results for our car, but we found a bit of pace in the end, so we need to look at that as a positive,” he said.

“Unfortunately, I finished with a DNF, but the end of the weekend, we were in the top 10, showing good form.

“As long as we keep improving each weekend, then that is what we need to do. The team did a great job all weekend and I’m sure we’ll be better for the next event.”