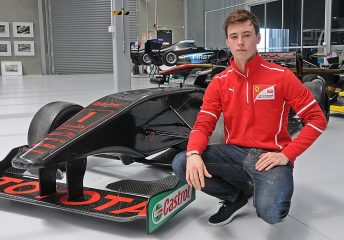 This time it’s to win: Marcus Armstrong says he has a singular focus for the coming Castrol Toyota Racing Series.

Just back in New Zealand with the Italian Formula 4 title on his trophy shelf, Armstrong (17) is shrugging off jet lag. A year in the full-time Ferrari Driver Academy has armed him with maturity and experience in equal measure.

Armstrong is aware he has a fight on his hands in the coming Championship. He says he knows what to expect and what he wants to achieve: the outright title.

“So that doesn’t mean going for every race win, or to win every round. It means being consistent and making sure I bank points at every round,” he said.

“I’m a very ambitious person by nature, and in TRS last year I was out to win every race. That started well with the first race but when I tangled with Jehan Daruvala and was out of the Lady Wigram Trophy race that was a hard blow to recover from,” he said.

In the five round 2018 Championship, Armstrong says, team-mates are also rivals and the relationship between a driver and his race engineer is critical. Operating within professional team set-ups in the local Championship is a key drawcard for international drivers who would otherwise be using a simulator, locked in gym routines or at best driving ‘lap after lap after lap’ in testing.

“TRS is great, because it puts you up against some of the world’s best – and they are drivers you’ll meet in the northern hemisphere. The circuits are the great leveller because the European tracks are wide and mostly very flat, so my rivals have to adjust to being very precise, especially with these current cars, which have lots of downforce, plenty of mechanical grip but can be quite lively – so they take a lot of driving,” he said.

“I’m up for the challenge.”