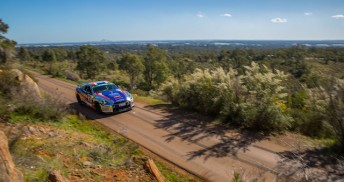 MEDIA RELEASE: Perth’s premiere tarmac rally the Quit Targa West will be bringing heart pumping motorsport action back into the heart of the CBD, Perth Hills and surrounds from August 11 to 14.

The 12th running of the tarmac rally will see over 60 rally teams, in a mixture of performance, classic and exotic vehicles, competing against the clock on some of Perth’s most iconic roads.

“We are delighted to welcome back a number of repeat competitors, and it also gives us great pleasure to welcome the ever-increasing number of first-time ‘rookies’.

“As in previous years our key goals are to provide a five star event for competitors, where the event’s spirit is centered on enjoying the thrill of the open road in a controlled, yet competitive environment.”

Before the tarmac action gets underway, competitors will gather in Forrest Place from 11am to 2pm on Thursday August 11 for the Ceremonial Start celebration. The area will be abuzz with anticipation for the official start of the event, and the public are invited to join in on the excitement and see the race cars up close.

Competitors will again come together from 6pm to 9pm on Friday night to put their vehicles on display for the enjoyment of admirers at the Northbridge Show and Shine.

This year the stages will total over 242 competitive kilometres, and will take participants to Barbagallo Raceway, Malaga, Whiteman Park, Kalamunda and the infamous Zig Zag, the picturesque open country roads of Toodyay, Lower Chittering and Bullsbrook, and Langley Park for the grand finale City of Perth Super Stage.

Spectating the rally action is free, and all 34 stages feature a number of locations where the public will be in prime position to witness the motorsport action.

Mr. Tapper thanks local governments and residents for their support and willingness to share their beautiful locales with the event again.

“We are grateful to the authorities and residents in allowing the competitors to enjoy their magnificent surroundings, and use some of the best stretches of tarmac this huge State has to offer,” said Mr. Tapper.

“We feel in a privileged position in being able to run this event for 12 years now, and its longevity can be mostly attributed to the support we receive from the greater community.”

Thursday, 11th August: 11am to 2pm – Ceremonial Start, Forrest Place, Perth CBD (Rally action can be seen in Wanneroo and Malaga between 2pm to 8pm).

Saturday, 13th August: 9am to 5pm – Rally action can be seen in Toodyay, Lower Chittering and Bullsbrook.

· Approximately 60 competitors (numbers yet to be finalised).