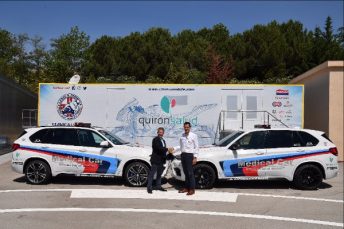 Dorna Sports and Quirónsalud are delighted to announce a new agreement that sees Quirónsalud officially named as MotoGP™ Medical Direction, strengthening the relationship between the two parties that first began in 2013.

As well as Medical Direction from Doctor Angel Charte, Doctor Xavier Mir and Doctor Enric Caceres that began at the Catalan GP this season, the agreement also includes a digital deal that will see Quirónsalud have a presence on the MotoGP™ website and social networks – as well as sponsorship of the Clinica Mobile onsite in the paddock at the European races.

The Clinica Mobile was introduced in 1977 to provide healthcare services to the paddock and soon became a point of reference for excellence within the MotoGP™ World Championship. The new agreement with Quirónsalud will assure the Clinica remains a frontrunner in its field, as well as continuing to develop and progress in the fast paced world of MotoGP™.

Julio Fernández-Llamazares, Corporate Director – Communication and External Relations, Quirónsalud has declared: “Quirónsalud put every bit of our healthcare experience at the disposal of a high level competition such as the MotoGP World Championship, to bolster the safety and security of riders at the track. We also reaffirm our commitment to healthy lifestyles and habits, amongst which is taking part in sport due to its recognised health benefits.”

Pau Serracanta, Managing Director at Dorna Sports commented: “I’m very happy we have signed this agreement because it means we have strengthened our ties to Quirónsalud. Furthermore, we’re now including a digital element in the deal to be able to connect to younger fans, as well as sponsorship of the Clinica Mobile, which is a point of reference in the MotoGP™ World Championship.”