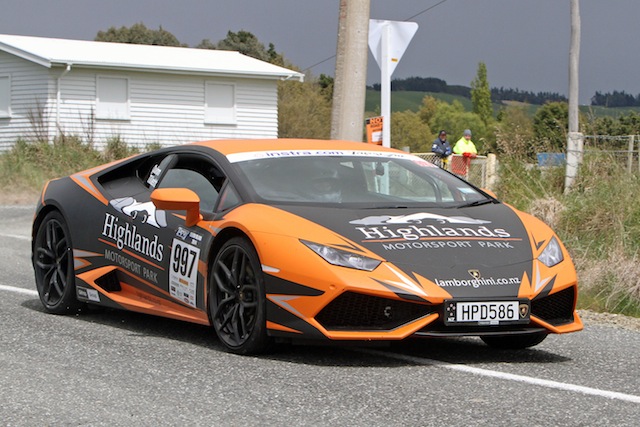 The return of Tony Quinn and co-driver Naomi Tillett in Quinn’s repaired Lamborghini Huracan was the big story on the eve of the second to last day of the Targa South Island tarmac motor rally.

At days’ end in Cromwell though, it was the sheer pace of expat Kiwi Gavin Riches and co-driving wife Amy in their repaired Porsche GT3 Cup car which had everyone on the event talking.

True to form, determined five-time event winner Quinn had made extraordinary efforts to repair his brand new Lamborghini after the stage-end accident on the first timed day of racing near Oamaru on Tuesday.

He and Tillett were quick too, topping the time-sheets in the Instra.com Allcomers 4WD class on the day’s first stage, just outside Gore.

Not today, though, as Riches, bit firmly between his teeth after losing his early event class lead to a broken exhaust and engine bay fire late on Thursday, was quickest overall through all four stages timed today in his two-wheel-drive Porsche.

In the day’s first stage, a 20.93km dash up the roller-coaster Diamond Peak road from Gore to Kaiwera then Pukerau he was two seconds quicker than Allcomers 4WD class winner Quinn.

In the second, slightly longer return run over Tuesday’s 21.45km Lawrence stage from Tuapeka Mouth to just outside Lawrence, he was 12 seconds quicker than runaway event leaders Glenn Inkster and Spencer Winn in their Mitsubishi Evo 8.

And in for what many of the drivers was the day’s highlight, the north to south run through the epic 41.15km Moa Flat stage from Ettrick to Heriot, he was seven seconds quicker than new Allcomers class winners Harry Dodson and Glen Cupit in the Dodson Motorsport Nissan GT-R35.

Dodson and Cupit were also quickest through the first stage of the afternoon, a fast 16.75km dash from Maitland to Chatton in Eastern Southland, but again the Riches were faster, this time by five seconds.

“It was our only option,” explained the Florida-based Kiwi. “We lost so much time fixing the car yesterday we are out of class and overall contention but if we want to get back, maybe, to the top ten we just have to fight really hard so that’s what we have been doing today.”

For their part, Quinn and Tillett remained in the top ten in class for the rest of the day, finishing fourth in the second stage, seventh in the third, and fourth again in the fourth.

Originally the field was to contest six stages today but time delays after lunch forced the organisers to cancel the final two, the 20.32km run from Waikaka to Waikoikoi, and the south-to-north repeat of the morning’s Moa Flat epic.

“It was a shame, obviously, for everyone involved in the event,” said event director Peter Martin. “The feedback we’ve already received – both from competitors and people who made the effort to come out and see what Targa is all about – is amazing, and the roads in Eastern Southland and West Otago are some of the best we’ve ever had the privilege to use, but we also take our responsibilities to the local communities seriously and sometimes you have to make hard calls. In this case it was around the weather giving us issues round the service park at Tapanui and the window of time we had allowed for the school buses.

“Initially we were going to delay the start but community always comes first in these cases so we made the call to just tour the cars through the stage and get the field to Cromwell.”

While all this was going on event leader Glenn Inkster and co-driver Spencer Winn were trying to find a balance between stage-winning speed and event-winning expediency.

The pair were second in class to Quinn and Tillett in the first stage, topped the class time-sheets in the second then were third behind Dodson and Cupit, and Andrew Simms and Chris West (Mitsubishi Evo 10) in the third and second again to Dodson and Cupit in the fourth.

Overall the Ecolight Evo pair still enjoyed a (class and overall) lead of almost seven minutes over fellow Mitsubishi Evo runners Todd and Rhys Bawden in class but – believe it or not – that was little comfort to the Pukekohe driver.

“There is a whole day of rallying to go, so it’s not over. You just have to look at Jason Gill last year when he was leading and his car broke down on the last day”

“It was also quite nerve racking in the morning as I was just struggling with thinking whether the car was having problems,” he said

“What it was though was a small misfire but we changed the plugs and since then it hasn’t missed a beat.”

With just the final day in the Lakes District to go now, the order class by class has settled down with Inkster and Winn leading Instra.com Allcomers 4WD and overall in their Mitsubishi, Dunedin pair Martin Dippie and Jona Grant in front in Instra.com Modern 2WD and Mark and Chris Kirk-Burnnand retaining their lead in Metalman Classic 2WD.