Queensland-based Scot Quinn was forced to miss the 2013 event when it coincided with the opening of his Highlands Park motor racing circuit near Cromwell, but came back with a brand new car – a Lamborghini Huracan – for last year’s 20th anniversary event in the South Island.

A crash on the second day put he and Tillett out for two days though the car was repaired and the pair returned to contest the final two days of the event.

In their absence, Inkster, from Patumahoe near Pukekohe, and Winn from Howick in Auckland, dominated the Christchurch-Queenstown event, eventually crossing the finish line eight minutes and 10 seconds in front of fellow Mitsubishi Evo pair Todd and Rhys Bawden, who finished second. 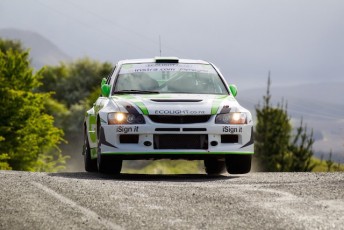 Inkster and Winn have already won the two Targa tarmac events held earlier this year, the one-day Metalman Targa NZ Rally Sprint at Papakura in March, and the three-day Targa Bambina between Auckland and Rotorua in May.

But the pair have yet to win all three events in the same year. Something Inkster says he and Winn hope to do this year.

“Winning the 20th anniversary event was obviously our main goal last year, but having to pull out of the North Island (Targa Rotorua) one last year was like unfinished business. So this year our main goal is to not only finish all three Targa events but to win them as well.”

This year’s six-day event starts in Auckland on (Labour Day) Monday October 26 and finishes in Palmerston North on Saturday October 31.

In-between are 35 closed special stages comprising a total of 1035.5kms linked by 1431.7kms of touring stages with overnight stops in Hamilton, New Plymouth (two nights), Palmerston North and Havelock North before the finish back in Palmerston North (at the city’s Square) on Saturday October 31.

A two-day Targa NZ Regional Rally event-within-the-event is also being held. It starts in Palmerston North on the second-to-last day of the main event and takes in the final 14 stages of the main event.

Response from the event’s many regulars has been immediate and enthusiastic with over 60 entries in the competitive section and over 20 in the concurrent but non-competitive Targa Tour.

Having already won the Targa New Zealand event five times – first back in 2003 in a Porsche with Keith Wenn co-driving, then four-times in a row between 2009 and 2012 with Tillett in the co-driver’s seat in a Nissan GT-R35 – Quinn is widely regarded as the ‘King’ of the local event. But he and Tillett are not unbeatable, as Inkster and Winn proved last year.

The 2015 event also sees the Targa debut of a new Volkswagen Polo-based tarmac rally special to be driven by former speedway and SuperGT class ace, John Rae from New Plymouth with David Leuthart in the co-driver’s seat.

Set to add interest to the Modern 2WD class, meanwhile, is Mike Lowe, who last year celebrated his 20th Targa New Zealand event behind the wheel of his diminutive 1964 Fiat Abarth 1000.

True to his word, after finishing the 2014 event Lowe left the little Abarth at the New Zealand national motorsport museum at Highlands Park, promising to replace it with its spiritual successor, a 2015 Fiat 500 R3T Abarth.

That car is currently on its way to New Zealand with Lowe and co-driver Phillip Sutton set to – literally – carry on where they left off, complete with ENZED hose and fittings backing.

Other combinations expected to do well in the 2WD Modern class include Clark Proctor and co-driver Sue O’Neill in Proctor’s turbocharged Nissan V6-engined Ford Escort, Martin Dippie and Jona Grant in Dippie’s Porsche 911 GT3, and husband and wife pair Ross and Carmel Johnson from Hawera in their Holden Torana A9X V8.

In the Metalman Classic 2WD drive class it’s hard to look past a member of the Kirk-Burnnand family with last year’s class event class winner Mark and father Chris again spearheading the attack in their M3 BMW. Last year though Nelson man Bruce Farley put up a serious challenge in his BMW 325i and he returns this year keen to improve on the third in class he and co-driver Tim Eddington achieved 12 months ago.

Also back for another year from Queensland’s Far North, are husband and wife Keith and and Mary Anne Callinan in one of a number of Mk 11 Ford Escort RS1800s entered in the event.

The R8 Clubsport will be one of two promo cars running ahead of the main field with Murphy and fellow former racer, ‘Racing Ray’ Williams acting as roving ambassadors for the event.

Information on both the main (six-day) 2015 Targa New Zealand and two-day Targa Regional Rally events is available on the event website www.targa.co.nz