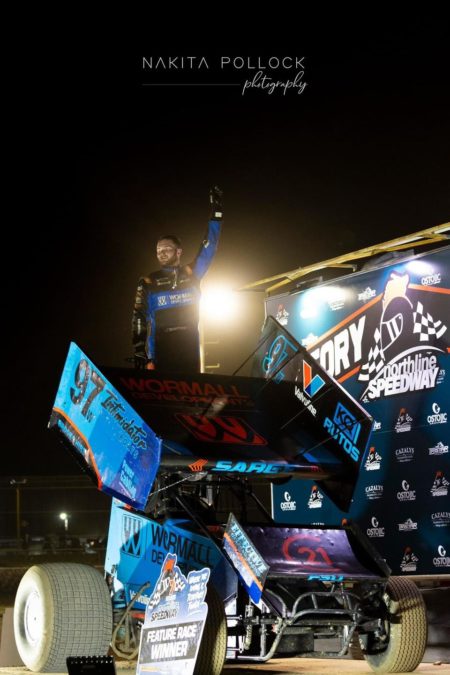 Last Saturday night Kale Quinlan emerged victorious in Round 3 of the Sprintcar Track Championship at the 7Darwin Northline Speedway. After starting on the front row Quinlan put in a faultless display as he led all 25 laps on his way to first A-Main victory in a 410ci Sprintcar.

In all a total of 10 drivers signed in to compete but they would have to wait as rain delayed the start of proceedings. Once the unwanted showers passed it was Todd Moule who set quick time in hot laps with a lap of 15.213 just edging out Chace Karpenko (12.250).

Quinlan got his night off to a winning start as he defeated Ben Atkinson Jr and Karpenko. Atkinson was behind the wheel of a new car following his crash the week prior. The final heat of the night was an all the way win for Mitch Wormall with Todd Moule and Karpenko completing the top three.

Following the heats Quinlan and Karpenko started on the front row and that’s how they would run throughout the feature event as Quinlan was never challenged. His outright race speed was reflected on lap 18 of the feature event when he reset the 1 lap track record with a lap of 11.214 seconds, lowering the previous record of 11.420 set by Jamie Veal in 2019.

Second across the line was Chace Karpenko with Victorian youngster Todd Moule completing the podium. Previous round winner Mitch Wormall was next ahead of Cori Jackson and Lenny Cole.

The A-Main saw the red lights come on twice with Atkinson inverting his #2 on lap 9 while running third before the race ended three laps later for Alice Springs resident Matt Bell.

The week prior the track hosted round 2 of the Track Championship with 12 drivers fronting for action. In addition to Ben Atkinson Jr, Chace Karpenko and Hayden Brown, the drivers who swept the podium in the opening round, the field also included Western Australian Mitch Wormall and Victorian’s Todd Moule and regular Formula 500 race winner Jack Bell.

Following a heat win and a second placing the A-Main belonged to Wormall as he led all 25 laps to defeat Todd Moule and Kale Quinlan. In what was a real race of attrition as Cori Jackson, Alice Springs racer Lenny Cole and David Ling were the only other finishers.

Mid race saw the end for two of the major contenders after contact between Wormall and Ben Atkinson Jr resulted in an accident that also involved Chace Karpenko. At the time Atkinson and Karpenko were running second and third.

Round 4 of the Sprintcar Track Championship at the 7Darwin Northline Speedway will be held on Saturday June 25, 2022.