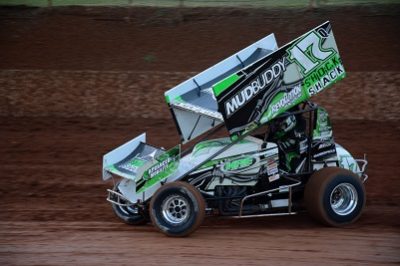 Already the home of Queensland’s richest Sprintcar race and the most prestigious season-long championship in the state, this weekend Ausdeck Patios Archerfield Speedway hosts the 2017/2018 Queensland Sprintcar Championship, with drivers from four states to fight it out over two nights of racing on Saturday and Sunday (May 5 & 6). In what will be a stellar weekend of action featuring more than 150 competitors, Midget racers will contest the 50-lap Jim Holden Memorial on Saturday night with support from Formula 500s, Lightning Sprints and Open Sedans, while Sunday evening will be a state title triple bill featuring the Queensland AMCA Nationals Championship and the Queensland Microsprint Championship, along with Dirt Modifieds and fireworks.

Headlining the Sprintcar entry list are the only two drivers amongst the nominations who have won this event previously, namely Luke Oldfield and Andrew Scheuerle. For the last couple of seasons, these two have been by far the most consistent drivers in Sprintcar competition at Archerfield (and elsewhere in Queensland) and they both rise to the occasion when the big events roll around and the other 27 drivers contesting this event will be acutely aware that finishing ahead of these two will almost certainly ensure they are on track for a podium finish. Those whose recent form suggests that they could very well add their name to championship winners list – an honour board that features no less than five Australian titleholders in Gary Rush, Garry Brazier, Brooke Tatnell, Todd Wanless and Robbie Farr – includes a trio of talented youngsters in Mitchell Gee, Lachlan McHugh and Michael Saller, all of whom have produces some stunning runs in recent weeks. McHugh, of course, dominated the Easter Triple Challenge and Saller scored his maiden feature race win here three weeks ago before backing up with another superb drive last Saturday night, while Gee has also tasted the spoils of victory and has been a regular top-five finisher throughout the season.

Bryan Mann has won both the Australian Open and the Archerfield Track Championship, so he is obviously a contender, along with Toowoomba’s Peter Lack, who will be rueing the mistake from last Saturday night that took him out of the lead in the feature race. Of course, Allan Woods is a feature race winner this season and others to impress with podium results of late include Cody Maroske and Jayden Peacock, while joining the Sydney-based Saller in trying to become only the eighth driver in 36 years to take the championship trophy out of the state will be South Australian hotshoe Ryan Jones and Victorian Peter Milnes.

In the wake of the horrific accident in Sydney last weekend that has left local racer Reid Mackay in a very serious condition in hospital, the Jim Holden Midget Memorial will be an opportunity for fans and competitors alike to come together in raising funds to assist the Mackay family with the costs of treatment and recovery. It is not surprising then that the event has attracted the best field so far this season – in both quality and quantity – with a line-up that includes the winner of the Sydney 50-lapper in New Zealand gun Taylor Clarke. Fellow Kiwi Hayden Williams is also in the field, as are Sydney stars Matt Smith and Nathan Smee, along with all of Queensland’s best Midget exponents such as Scott Farmer, Rusty Whittaker, Darren Vine, Troy Ware, Brendan Palmer, Anthony Chaffey and Mark George, while rookie Tim Farrell has been impressive and might upstage a few of his more experienced rivals. Farmer has been the stand-out in the Polar Ice Track Championship so far this season, with Vine his most persistent threat, although it was Ware who took out the Danny Davidson Memorial in his last appearance here. Whittaker, the current track titleholder, produced his best performance of the season in the most recent track championship round with a runner-up finish behind Farmer and will now be looking to take the next step and reacquaint himself with victory lane.

Come Sunday evening, more than 30 AMCA Nationals will hit the track to decide their Queensland Champion for the next 12 months. Current national champion Jeremy Moore from South Australia heads the entry list and, despite having subsequently won the Victorian and New South Wales championships, this may prove to be his toughest assignment yet since winning the national title in Ballarat earlier in the season. Proven front runners amongst the locals include Steve Potts, Steve Price, Matt Hardy, Nathan Durston, Michael Mason and four-time national champ Shane McKinnell. The best chances from New South Wales seem likely to be Shane Newstead, Paul Reeves and category stalwart Jim Knight, while Tasmania is sending a pair of speedy steerers in Rod Bassett and Daniel Brooks.

With their only other scheduled Archerfield appearance this season washed out, none of the 16 competitors contesting the Queensland Microsprint Championship can lay claim to any real advantage when it comes to track form and, whilst that might instil some confidence amongst the interstate competitors taking part, an undefeated run through the heats and feature race in Toowoomba last weekend from Shane Munro was a very ominous exhibition.

The last time Dirt Modifieds competed at Archerfield, Australian champ Kevin Britten and former titleholder David Clark were expected to fight out the feature and that was how things went until they ran into each other, putting both men out of contention. Sunday night affords them an opportunity to redeem themselves and finish the season on a high, although they will have another national title winner in Andrew Pezzutti to contend with on this occasion. Having won the prestigious Paul Britten 44 earlier in the season, Ray Klarich will also be a threat, while former NSW champ Geoff Phillips will be looking for a strong showing in his first Brisbane appearance since returning to competition.

Gates open both nights at 4.00pm (3.30pm for online ticketholders), with early racing from 5.00pm. Saturday night will see Sprintcar time trials from 5.30pm, with the main program on both nights scheduled to kick off at 6.00pm.