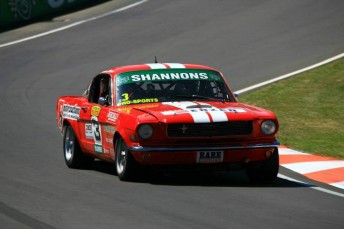 This Weekend The Queensland Racing Drivers Championship moves to Queensland Raceway for Round 2 with more than 140 drivers competing. The Event will feature seven categories across the weekend and for many it will be their first outing at the Ipswich circuit this year.

A fan favourite the Trans Am will be out enforce in their second championship round for 2016. 22 Cars will line up with new faces mixing with the seasons old charges.

One driver making his Trans Am debut is New South Welshman Cameron Mason who will take to the field in a 1966 Ford Mustang Shelby Fastback which he previously has campaigned in Touring Car Masters.

Mason will looking to take it up to series leader and defending champion Charlie O’Brien. O’Brien swept the field at round 1 at Lakeside but will come under pressure from John English and nephew Shannon O’Brien in a Pontiac Firebird.

Division 2 will welcome a new car this weekend driven by 2012 Division 2 champions Gareth Jones, Jones will pilot a 1966 Ford Mustang Coupe in the Hertz colour scheme.

Formula Vee’s first outing at Queensland Raceway will be a hotly contested affair with 2015 champion Paul Manteit sitting out the year. In Round 1 it was Paul Kellaway all the way with four wins from four racers at Lakeside.

Kellaway was masterful in his Jacer with the competition only looking on. Bruce Acherson in his Mantra took out second after raging battles with Eddie McFaul in a Bee Cee.

McFaul and Acherson will be joined by Ken Filbey in looking to knock Kellaway off top perch.

Improved Production brings another large field to Queensland Raceway, with the top 3 championship contenders in both the over 2 litre and under 2 litre classes all battling to secure points and stay on top of the leaders board.

Over 2 litre Championship leader Justin Wade took all 3 race wins for round 1 and leads the Championship but is under fire from Bruce Cook in his turbo Escort as well as David Homer in the “giant killing” Suzuki.

David Waldon leads the under 2 litre class with his Mazda running in the top 5 all weekend at round 1 and will be striving to make sure his form continues this weekend.

As always though there will be a strong field of under 2 litre cars to ensure that the Waldon Mazda doesn’t get it all its own way.

QR Sports & Sedans will see the coming together of three categories including the popular Classic Sports Sedans. TA2 class will also join in with a Chevy Camaro for Cameron Sendall before the category makes its racing debut in 2 weeks time at Lakeside Park.

The TA2 class are American space frame cars built on Mustang, Camaro and Dodge Charger platforms. In Classic Sports Sedans the MARC car of Keith Kassulke, Ryan McLeod and Geoff Taunton will all take on the likes of the Chev Corvette of Steve Arnett down to the giant killing Suzuki Swift of Ben Cavanagh.

Italian Challenge will battle it out for the Col Wenzel Memorial Trophy with no doubt the man to beat being Maika Ter Horst in his Fiat 124.

There will, however be a gaggle of Alfa Romeos in hot pursuit including Greg Murphy in the turbo Alfa 75 and Joel O’Farrell in his Alfetta GTV.

Also competitive, but at this stage, unproven will be Rob Robson in his newly purchased Alfetta GTV6 and Zeke Halasz in the supercharged Alfetta GTV.

The Italian Challenge marks its fourth year and has attracted a dozen cars to its grid for the opening round.

Keema Excel Cup moves from Lakeside to Queensland Raceway this weekend in round 2 and the big question will be can anyone stop Brett Parish.

Parish showed a clean pair of heels at round 1 and with the longer straights of Queensland Raceway will be hard to beat.

V8 Ute driver Cam Wilson put the challenge to Parish at Lakeside but an off put him back in the field while veteran race Greg Mammen peppered the podium at round 1.

Michael Tuckwood last years runner up will be one to keep an eye on as the 28 car field does battle around the Queensland Raceway circuit.

It will be the first time the Excel’s have been on Queensland Raceway with the new Dunlop Drireza tyre which impressed competitors at the Lakeside opener which no doubt will add to the interest this round.

The Keema Excel Cup will use all three circuit layouts this weekend in what is surely to be an entertaining affair.

Queensland Sports Car Championship points leader Alex Kenny, sitting on 100 points after his perfect opening round would have to do little more than an oil change in his #22 Chiron too keep the car on the money this weekend.

Dave Barram, also driving a Chiron sitting in second on 90 points will be looking to take the challenge up to Kenny and get on equal terms on the points table.

On the longer straights of Queensland Raceway we can expect the V8 Radicals of Phil Holzberger and Simon Cilento putting up a greater challenge to the four cylinder chirons.

Grant Green, driving a Radical SR3 owned by Paul Stokell Motorsport has moved into class B lead, hot on his heels is Matt Vanderburg in his Minetti.

Round 2 of the Queensland Drivers Championship at Queensland Raceway, Ipswich is conducted over Saturday and Sunday 30 April and 1st May.