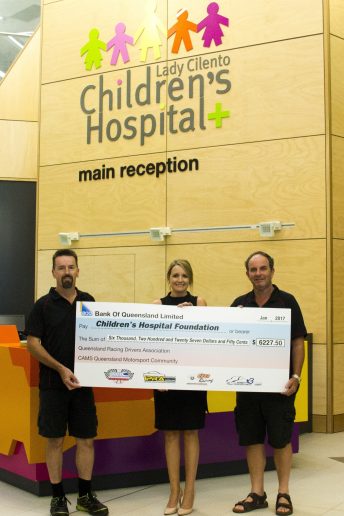 The Queensland Racing Drivers Association (QRDA) led efforts have set a new benchmark for fundraising on behalf of the local motorsport community in 2016, with a total of $6,227 raised for the Children’s Hospital Foundation.

Over the past 16 years, state level racers have raised tens of thousands of dollars supporting the Foundation, which ensures world class clinical care for sick kids, providing them access to the best possible medical equipment.

The bulk of the fundraising is carried out at the annual combined car club Christmas dinner and trophy presentation held at the Kedron Wavell Services Club, with money raised via raffles and auctions of items donated from within the motorsport community.

On hand at the cheque presentation were Donna Whiteley from the Children’s Hospital Foundation, alongside Chris Donnelly and Brett Batterby from the QRDA.

“For many years now, the CAMS circuit racing community in Queensland have been strong supporters of the incredible work carried out by the Children’s Hospital Foundation,” said Mr Donnelly, President of the QRDA.

“It’s heartening to see that with every year that passes, all of the competitors, officials, team members and families involved in the sport are willing to dig deep, and continue to support this very worthy cause.

“Our local motorsport scene is like a big family, and we are proud to be able to assist in raising some funds and awareness of the work of the Children’s Hospital, which is always there when it is needed.”

The QRDA is a CAMS affiliate motorsport club for drivers from all disciplines, from Supercars through to grassroots motorsport.

The overall QRDA Club Champion trophy is awarded to the driver who averages the best results out of all competing categories.