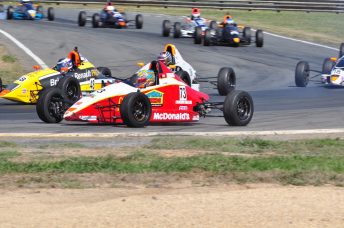 The second half of the 2017 Australian Formula Ford Series swings into action this weekend when the series heads to Queensland Raceway for Round 4, and a number of local drivers will be aiming to upstage the championship front-runners.

So far this season, the races have been dominated by the Victorian-based Sonic Motor Racing and Borland Racing Developments teams, with Max Vidau and Hunter McElrea (Sonic) and Jayden Ojeda (Borland) all winning races. The other race winner has been Aaron Cameron, another Victorian.

However, this weekend the BF Racing trio of Cameron Shields, Harrison Jones and Nathan Herne will be aiming to send some glory Queensland’s way.

Of the three, Shields is the one who has come closest to a race victory, chalking up a second-place finish at Wakefield Park. Team owner Brett Francis has vast experience in Formula Ford at QR, as both a driver and a race engineer, so Queensland success is certainly not to be discounted this weekend.

It’s a better story for the Sunshine State in the Formula Ford 1600 Series (for cars powered by the older Kent motors), Queenslander Mitch Maddren winning Round 1 of the series at Winton. Maddren will be even tougher to beat on home soil, although Anglo Motorsport driver Kane Coleman will certainly mount a challenge.

This weekend’s Formula Ford round will be live streamed via the Queensland Raceway live streaming service.

Queensland Raceway has hosted a round of the national Formula Ford series every year since 1999 – this weekend will be the 19th-consecutive year a round has been held at the venue.

The most successful Formula Ford driver at QR has been Steve Owen, with four race wins and two round wins. Owen went on to win two Supercars Development Series titles, finished runner-up in the 2010 Bathurst 1000, and is currently an endurance driver for Prodrive Racing Australia.

This weekend’s Formula Ford round will held as part of the Queensland Racing Drivers Championship race meeting, and as per QRDC regulations, each race will commence with a rolling start.