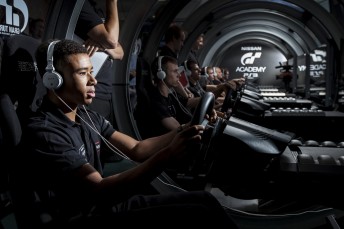 Giving Gran Turismo 6 virtual racers the opportunity to realise their dreams of becoming a real-life professional racing driver, the 2014 season of the Nissan PlayStation GT Academy competition is now live in Australia.

GT Academy has successfully challenged the traditional and costly route into professional motorsport since 2008. Anyone in a participating country with Gran Turismo 6 and a  PlayStation 3 will be able to enter the free qualifying rounds within the game’s automatic online update.

Racing driver hopefuls can also get involved via a series of live events. Kazunori Yamauchi, President of Polyphony Digital, is excited to see qualifying begin across the globe for GT Academy 2014.

“I am very happy that qualifying has now begun for a sixth season of GT Academy, kick starting our world-wide search to unearth another gamer with the talent to become a real life racer,” said Yamauchi.

“Every GT6 gamer will have the chance to develop their skills in a series of stunning Nissan Nismo vehicles and compare lap times with their friends while competing for a coveted spot at the  next stage of the competition.”

The successful PlayStation gamers from Australia, India, Mexico, Middle East and Thailand will win a place at a National Final event held in their country.

From there, the six leading Australian competitors will qualify for the International Race Camp at the world-famous Silverstone Circuit,  an established week-long boot-camp where the finalists will be put through their paces on and off the track, to unearth this year’s GT Academy champion.

The overall International winner will receive three months’ intensive training to prepare them for taking to the track with Nissan at the Dubai 24 Hour race in January 2015. In Dubai they’ll go wheel-to-wheel with experienced racing drivers and have the chance to prove themselves worthy of becoming a Nismo Athlete, one of the elite racing drivers competing for Nissan under the  banner of its motorsport arm, Nismo.

With qualifying now open, this is the chance for today’s GT6 gamers to follow in the footsteps of previous GT Academy winners who have gone from sofa to pro thanks to this innovative collaboration between Nissan and Sony Computer Entertainment Europe. Last year’s GT Media Information

Academy champions are competing in the Blancpain Endurance Series this season, and Lucas Ordoñez (2008 champion) will be racing alongside Wolfgang Reip (2012 champion) in the mould-breaking Nissan ZEOD RC at the Le Mans 24 Hours. Meanwhile, Jann Mardenborough (2011 champion) now has an eye on a career in Formula One®, having secured a GP3 drive in 2014 with Arden International and being selected to take part in a bespoke Red Bull Racing Driver  Development Programme.

“Everyone should enter GT Academy,” said Nismo Athlete Mardenborough, who is about to start competing in a Formula One feeder series less than three years after winning the competition.

“It’s open for anyone to enter. If you have a PlayStation 3 and a copy of Gran Turismo 6, just see how you go against everyone – that’s all I had in mind the year I won. If being a racing driver was your childhood dream, then GT Academy is your perfect opportunity to live it!”

The GT Academy qualifying update is available to access now on GT6 and can be played until 16:59 Australian Eastern Standard Time on Monday 16 June 2014. It is available to anyone with  a PSN (PlayStation®Network) ID and a copy of Gran Turismo 6.