History is known to sometimes repeat itself, but in Tim Weir’s case, it has a habit of doing so, with last Saturday night’s Queensland National 4s Title at Bundaberg’s Carina Speedway seeing him drive to victory for the third time in his career. 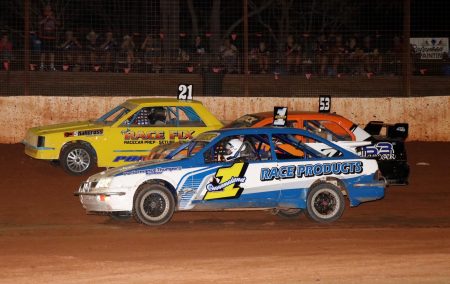 Clinching his maiden Queensland Title crown back in 2014 at Gatton’s Lockyer Valley Speedway aboard the Ford Escort that his teammate Dennis Shallcross now drives, Weir managed to reclaim the mantle during last season’s running of the event at Cairns International Speedway, successfully defending it last Saturday night by virtue of what was a clean-sweep performance.

Winning each of his three heat races and qualifying in pole position for the 40-lap feature race, Weir was relying on his strong setup . The race’s only interruption came on lap six when Shallcross was launched into a massive rollover, which brought the red lights out and ultimately destroyed the Weir family-owned car.

After that, the remainder of the race ran non-stop, with Weir doing well to navigate the lapped traffic, clearing out to what was a convincing win.

“It’s a great feeling to go back to back in the Queensland Title and overall it was just a really good run for us throughout the whole night,” said the Mooloolaba, Queensland-based driver.

“We’ve continued to develop my Ford Sierra and the time in the shed has really paid off, as evident in our Queensland Title results. The car didn’t miss a beat all night and it’s really promising for the rest of the season.”

With this season’s Queensland Title being the biggest yet for the National 4s class, Weir was extremely impressed with the level of promotion that went into making the event a success.

“I have to pay homage to the crew at Carina Speedway, who went to every effort to make sure that the Queensland Title was great event. They did a fantastic job and our team was proud to be a part of it,” added the 27-year-old.

Following his Queensland Title victory, Weir will now turn his attention to Modified Sedans, with his next two outings being the Queensland Title at Gympie’s Mothar Mountain Speedway on April 20 and 21, and the National Title at Kingaroy Speedway from April 25 to 27 aboard the David Clarkson-owned Qld # 58 Clarko’s Performance supported XE Ford Falcon.

To find out more about Weir and his team, LIKE them on Facebook by searching Weir Family Racing.