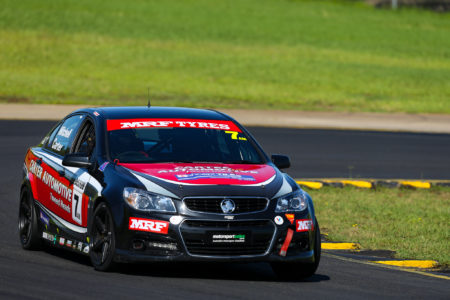 For the majority of the new team, this is their first time not only in the MRF Tyres APC, but also at Sydney Motorsport Park.

“We formed the team earlier this year and we are planning on doing most rounds of the series this year – we won’t be able to go to The Bend but we are looking at the events at Phillip Island, Morgan Park Raceway and Sandown,” Carter said, while thanking team supporters Carter Automotive and Concept Tiles Toowoomba.

“This year is a learning year for us for Bathurst 2021 – we have a little bit of experience in the sprints but not in the enduros and it is an entirely different headspace both for driving and the team.

“We formed the Happy Days Racing earlier this year. I raced with Brock in the HQs where I started out and then I raced him again in Saloon Cars where we both have won championships. I joined the QLD Production Cars last year after buying this car from Sydney and invited Brock out to test about a month ago at Queensland Raceway and he tested great, so we offered him a drive and I think he is going to be great.

“This is my first time to Sydney Motorsport Park – I have only raced outside of Queensland a couple of times at Bathurst but not at any other tracks.

“Already today it has been a great learning curve. With these 6.2L cars, the torque and pulling power out of the corners makes the car easier to drive for want of a better term. I have been short-changing and finding the drive out of the corners is better that way here, and it is a quite wide and flowy track too – it has been really good so far as I just learn my way around here.”

Brock Mitchell does bring a little Sydney and MRF Tyres APC experience to the outfit, having contested this round last year where he was unfortunately put out of the running early when his co-driver had a crash in their entry in the second race.

“It would be really good to finish the weekend and that is the main goal this weekend I think, we definitely don’t want what happened to me last year to happen to us this year! We will be giving it a good crack and see how we go,” Mitchell said.

“I think the season ahead will be good – there is a good bunch of guys here who know what they are doing and that has a lot to do with this game; I am really looking forward to it.”

The Happy Days Racing team was joined on track today for three unofficial practice sessions alongside the rest of the MRF Tyres APC and also New South Wales Production Touring entrants – who will take part in two of the one-hour APC races to be held this weekend.

Also included in the schedule will be the inaugural running of the MRF Tyres Invitational – a handicap race which will pit the top three cars of each class of the MRF Tyres APC and the NSW Production Touring Cars as well as the top five Pulsars against each other in a 15-lap sprint.

For more on the APC, please visit www.australianproductioncars.com.au or www.facebook.com/AustralianProductionCars