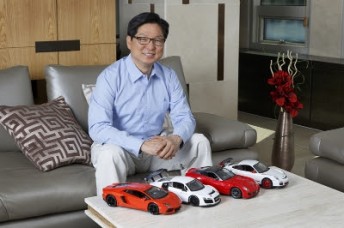 After that, he moved to TaeYoung Group, which had major influence on INJE Speedium project.\

He became the CEO of INJE Speedium Management Co. Ltd in December 2012.

Q: Please give us a brief history of INJE Speedium and the great events that you’ve held.

Jung: INJE Speedium is a new circuit and just finished construction last year. It started official operation in May 2014.

We received great praises from promoters and drivers said that INJE Speedium was a dynamic circuit with difference elevation and dynamic courses and it‘s hard to see in Asia.

Jung: I was invited to F1 Korean Grand Prize by a friend in 2010 and through this opportunity, I was getting to know about motorsports in earnest.

I have been involved with INJE Speedium with my company’s project since 2012 and then became the CEO of INJE Speedium.

Q; How did you first hear about Asian Le Mans Series?

Jung: When I participated in INJE Speedium project for the first time, I heard about Asian Le Mans Series in details.

Of course I had knowledge about 24H Le Mans. Therefore, I was glad to hear that Le Mans Series would be held in Asia.

Q: How do you see motorsports in Asia right now, and how do you think Asian Le Mans Series can help the sport?

Specially, Korean motorsports market is just starting to catch up with Japan, China and Malaysia which have active motorsports culture.

However, we can see positive signals of changing in perception of motorsports in Korea. Asian Le Mans Series can be a trigger to vitalise motorsports market in Korea.

Q: With the kick-off of Asian LMS in INJE Speedium, do you have something you want to share and your expectations of the race?

Jung; I have great expectation on Asian LMS, which will be held in INJE Speedium annually.

I am sure that many visitors will have great memories in INJE Speedium with the various events we prepared for family and variety of interesting attractions about prototype entry such as LM P2, new CN category.