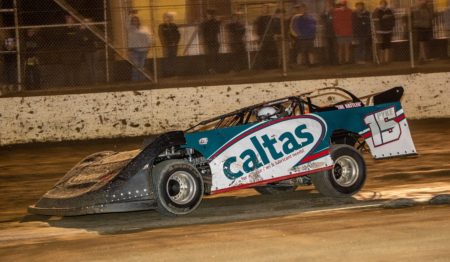 Newly crowned Tasmanian Late Model Champion Tim Pyke has only one regret when it comes to his speedway racing, and that is, he wishes he had started racing earlier but he is certainly making up for lost time.

The 48-year-old racer from Wynyard in Tasmania is currently in his third season of Late Model racing and is loving every minute of it.

With his rivals boosting various levels of speedway experience prior to stepping into Late Models, Pyke’s journey is a totally different one.

Four years ago, he went from watching in the stands to preparing to hit the speedway track all within the space of just a week.

Back in early 2017, Pyke was one night watching the Late Models around his local track of Latrobe Speedway, and he made the decision then and there that he would like to try his hand at the newest class to venture into the state of Tasmania.

The following day after attending that race meeting, Pyke made a phone call to veteran racer Brad Smith and a Rocket model car was organised to be purchased from Warren Oldfield and it arrived in Tasmania within a week.

For the 2017-18 season, Pyke hit the track and contested all the race meetings around Tasmania. Despite not setting the world on fire, he was learning a lot about racing and car setup and enjoying himself in the process.

After his debut season in Late Models, Pyke in the lead up to the 2018-19 season decided to upgrade his car, which was to a Club 29 car from American racer Morgan Bagley and was fitted with a CT525 crate engine, and it quickly saw him go from just making up the numbers to developing into a front-running contender.

The highlight of Pyke’s second season was winning the Tasmanian Series off the back of numerous feature-race wins. He also ventured over to the mainland for the first time, competing at Sydney’s Valvoline Raceway in NSW and Wahgunyah Speedway in Victoria.

For this current season, Pyke has continued to build on his form from the previous season and is leading the way in the Tasmanian Series point standings and has picked up multiple feature-race wins. Just last Saturday night at Hobart Speedway, for the annual Tasmanian Title, he scored a clean sweep of the night by winning both of his heat races and then backed up that form in the feature race.

This Saturday night Pyke and his team are headed back to the mainland aboard his Tas # 1 Caltas supported Club 29 car for the Victorian Title at Ballarat’s Redline Raceway, where he is hoping to produce a similar performance to the one at the South Australian Title. Apart from the Victorian Title, Pyke’s plan for the rest of the 2019-20 season is to remain at the front of the Tasmanian Series and hopefully wrap up back-back point standings wins.

Pyke’s mainland experience has certainly helped him improve as a racer, especially when he comes back to run in his home state. Another thing that is helping Pyke’s improvement as a racer is the support and advice that he receives from the experienced Brad Smith and Jarrod Harper and making it even more enjoyable is being able to do it with his family, wife Emma and son Logan. Another enjoyable thing for Pyke and the team is the camaraderie amongst the speedway competitors.

Supporting the Pyke team is their major sponsor in Caltas. The team is very appreciative of this support, as it has allowed them to do a lot more racing and take the professional look of their race car to another level.

Despite starting his speedway career later than most, Pyke is committed to racing for as long as he can possibly do it. Another thing is that his 13-year-old son Logan recently started in Junior Sedans, so the Pyke surname will be around the speedway scene for a long time yet.