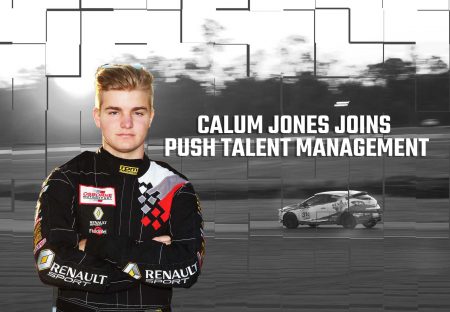 Jones has a vast experience driving in various racing categories including the Toyota 86 Series, Australian Production Car Series, Hyundai X3 Series as well as competed in the 2018 Hi – Tech Oils Bathurst 6-Hour in a Renault Megane RS 265 Trophy R. The talented youngster made a career milestone in 2018 as he claimed Class C Champion in the Australian Production Car Championship.

The 19-year old is considered one of the newest rising stars of Australian motorsport and welcomes the opportunity to be amongst seasoned campaigners whilst joining the team at Push Talent Management.

“It’s a great opportunity to be joining an agency such as Push Talent Management, John and his team run a very high-profile organisation and I’m very excited to see where it takes me in my Motorsport career,” admits Jones.

“I first met John at Queensland Raceway in 2018, and we have maintained contact since. When the opportunity arose for me to join the Push Management team, it was something I was very excited to become involved with.

“The Accelerate program is a great initiative and I feel very privileged to be a part of it. The junior program appeals to me as I think it will truly enable me to push me further up in my motorsport career (no pun intended).”

Managing Director, John Ruggiero is excited to see the Junior Development program grow and is looking forward to having Calum Jones as the newest recruit.

“I’m really pleased to have young Calum Jones on board with us in our Accelerate program. It has been a real pleasure seeing the development already in our other two young drivers, Zane and Jay so I can’t wait to see what we can do with Calum,” admits Ruggiero.

“Sponsorship and managing PR is an essential part of the motorsport world, so by creating this program where we can assist the young drivers and develop their brand, their craft, their fitness and conditioning and their commercial partnerships now, they can grow with the sponsors.”

as being awarded the Barry Sheene medal two years running. In 2016, the management company expanded to turn around Andre Heimgartner’s career, who is now in his second year with Kelly Racing and most recently scored his second ever podium. In 2017, the company continued to grow as they signed the ever so popular Chelsea Angelo, who competed in the 2018 Porsche GT3 Cup Challenge and this year takes on the inaugural TCR Australia Series. Additionally, in late 2018 the management agency signed Fraser Ross, driver in the Australian GT Championship who finished as runner up in the 2018 Australian GT Championship and will compete in the series again this year.

“Along with having the resources to assist in developing their skills, we also have the ability to use our existing drivers as mentors for our young drivers too, which is really unique,” admits Managing Director, Ruggiero.

“For example, last year we organised a trip for 16-year old Jaylyn Robotham to test drive a Mustang in the TA2 Asia Series over in Thailand with David Reynolds as a mentor. It turned out a success and now Jay is competing in the Championship over there for the 2019 season.”

Jones and Push Talent Management are currently exploring options for the 2019 season which may include Australian GT rounds as well as TCR opportunities.

“Coming off last year winning the Australian Production Car C Class championship with Colin Osborne alongside me, was such a great achievement for me personally, and it has given me some more confidence heading into this year,” said the young racer.

“While we don’t have any plans set in stone at the moment, I believe we are in a good position to have some pretty exciting appearances in a range of categories this year. While I’m beginning my second year of University this year, I want to keep on top of my studies while also progressing my motorsport career. I’m hoping this year we will be able to ground myself quite well with the Push Talent Team and strive towards a big year in 2020.”