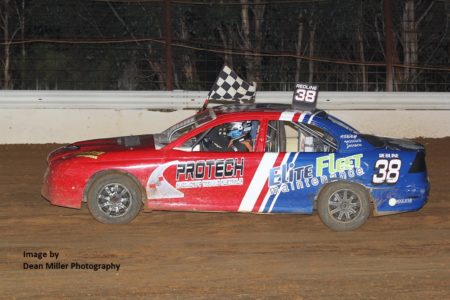 Labour Day weekend at Redline Raceway concluded with some terrific results for regulars of the venue with a Ballarat local and two Geelong based regulars winning the major events across the weekend in front of an enthusiastic crowd on both Saturday and Sunday nights.

For the first time, Redline Raceway held a feature on Saturday for race drivers whom had not ever won a recognised feature event. The twenty-lap final was a terrific stoush with Purdie, Nathan Dunn, Karen Ferguson, Scott Secombe, Luke Jenkins and Tim Hutchinson some of the featured protagonists. On lap ten Steven Brook from Ballarat hit a rut at turn three and ended upside down in his race car however uninjured whilst Purdie was never headed out the front of the pack. Purdie won by just over a second officially from Dunn, Ferguson a Ballarat woman, Secombe in fourth and Jenkins fifth. In qualifying Dunn won all three of his races to claim the feature pole start position before Purdie got the best start of the two of them and proved difficult to pass.

In Compact Speedcar racing Jamie Paull who was expected to do swap seats between his motorbike engine powered Speedcar to his V8 powered Sports Sedan crunched the wall hard and broke the car in heat one. His brother Justin won the heat before Butch Hutchinson won the next two. In the final Justin Paull who had a connection with the late Keith Astrella when he started in Compact Speedcars was delighted to win the race by a margin over three and a half seconds from Butch Hutchinson, Tania Hallett, Mark Hutchinson and Ann Clarke.

Steve Hodder proved to be the strongest in the Unlimited Sedan final when he won by almost half a lap distance over Adam Monti and Jimmy Harris.

Saturday night Sports Sedan action gave us a gripping feature race in the mini final. With drivers having completed three of their five heats allocated across the weekend to each competitor, some drivers elected to park their cars and not risk them in the mini feature, others went out to see if they could crack some cash on offer. Jamie Paull lead early from the likes of Zac Swanson and Dale Smith/ Smith and Swanson traded places and Paull sat just ahead of them out on track. On lap fifteen, the final lap Swanson made his move passing Paull and winning by just .227 in a barnstorming finish.
Into Sunday’s racing and continuing with the Sports Sedans it would be Lucas Conder’s best weekend for a while. Conder a popular local who works on many race cars in the class could not get his car ready so local Mick Rizzoli had given him his, one of the best cars going around. Conder a talented race driver who’s not quite had the complete car package under him for some time, made the most of the opportunity to win the Sports Sedan Masters final in front of another local Ballarat lad and his mate, Zac Swanson.

The twenty-five-lap final began with Conder in front of Dale Smith, Swanson, Chris Rieck and Leigh Bourke. Fourteen laps into the race Swanson moved to second and stayed there. Some of the race casualties included Nathan Fawns with a broken right front hand side steering, Paull with clutch issues that plagued him on night two and Bourke with some mechanical issues. Conder went on to defeat Swanson by .458 of a second ahead of Smith in third, Corey Knox and Ricky Ashmore.

The AMCA Nationals had some visitors from Tasmanian joining the line-up however it would be Neale Peachey from Melbourne’s Western Suburbs who would have a terrific night. He won all three of his qualifiers then won the final by .638 of a second of Tasmanian Andrew Ryder, Trevor Thierry from Geelong and Darren Bloom and Justin Richardson in a warmup for the upcoming Victorian title at the venue.

The big event on night two for many was the King of the Mount for Street Stocks, won the last three seasons by a South Australian, the Victorian’s were keen to get their name on the perpetual trophy. Steven Watts from Warrnambool was the big story of the night, the pace was there for his car and a couple of wins during qualifying had people looking at him as a winner. However, he was unable to get beyond the qualifying with mechanical issues and all eyes looked to Degoldi.

Degoldi took control on lap one with Dale Blomeley moving ahead of Brad McClure and into second spot. Fifty laps was the final length of the feature and at lap sixteen we had not had an incident, and everybody was still motoring along until Scott Secombe tried to pass some backmarkers whilst in the lead top five drivers and came to grief. His left-hand side steering was broken. That started a string of retirements including the previous nights feature winner Scott Purdie. McClure and Tim Hutchinson had a race long battle using the higher line on track more than most others.

At one stage Brooke Ferguson was on a charge until she made contact with Brad McClure and officials started her at the rear of the field and then not long later her mother Karen who was on her own charge and on the way to third spot seemed to have some sort of issue down the back straight that sent her flying through the infield bouncing over the edge of the track in turn three and straight into Hutchinson crunching him against the wall.

Hutchinson was able to continue; Ferguson was not as Brooke made her way back to the front bunch of the race. At fifty laps Degoldi who led all of them came out on top with the King of the Mount hardware defeating Blomeley, McClure, Dean Jenkins and Hutchinson.
In two weeks’, time Redline returns with the Victorian AMCA Nationals state title and the Speedcars along with support classes.