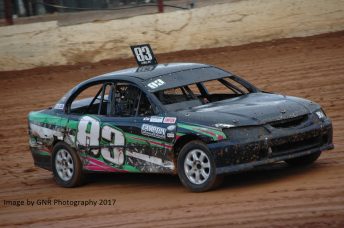 Under the threat of rain all day, the volunteers and committee of Redline Raceway persisted with the second last race meeting of the season and it paid off when all seven race divisions were able to get through a complete race meeting of qualifying and finals, some drivers will go away with memories forever after winning their track championships against tough competition.

AMCA Nationals were the number one class on the night competing in their final round of the Barry Reidy Memorial which points were important towards that three round event that will have results made public at the AMCA presentation night; they were also competing for a track championship victory.

The feature race for Moore and Dean Heseltine a pre event fancy was short lived as both were involved in a tangle down the back straight breaking both their cars. Collins although pressured at times by Sullivan drove his Chev powered machine to a win over Sullivan, Casey, Sharon Tindal and Mills.

Mini Sprints were competing for the final round of their Hurricane Automotive Products Wild West Shootout series and of course the track championship also. With top qualifiers to the back in the feature race in an evenly matched field the task to get to the front proved tough for the top qualifiers as Darren Schnoor strode away from the front and had a great distance between he and his brother Peter Schnoor.

The Schnoor brothers finished one and two with Brad Lowe the Victorian Champion in third then Andrew Burleigh followed and Owen Schnoor. Lowe’s result helped secure first in the Wild West Shootout in his last Speedway race meeting as he moves onto Tarmac Kart racing.

Standard Saloon’s looked like having a ding dong battle between Scott Whittle and Jay Dickson at the front of the field, it went that way for a number of laps before Whittle headed infield and out of the race with a wrecked tyre.

Geelong and Ballarat residents took the top five places in the final when Dickson went on to become the track champion ahead of Hayden Clifford, Tim Hutchinson, Dave Chivers and Shell Sinclair.

David Barrie (two qualifying wins) and Mark Purdie (the other win) dominated the heat races prior to the feature race in Street Stocks. Purdie with mechanical concerns had to jump into a sister car to start the feature race to continue battle with Barrie and the sensational action between the two continued.

As the race unfolded just one mistake at a critical moment opened the door for Barrie to take the lead and never looked back as he went on to take the track championship win over Purdie, Kevin Apps, Darren Paisley and Mitch Viney.

In V8 Thunder Sedan racing mechanical issues knocked out most of the field in the qualifying with Anthony Wilson without oil pressure, Shane Stephenson (Engine), Graham Nugent (Suspension) and Greg Raggatt (Manifold) not being able to make the final. Kieran Brennan Jnr who has had a wonderful season littered with feature wins took the big win in the track championship ahead of Mick Rizzoli and his father Kieran Snr.

Victorian Speedway Council Open Sedans were given a track championship also with Phil Lepoidevin and Leigh Bourke the strongest competitors during qualifying. Lepoidevin had three wins including a win over Bourke; Bourke had two wins and Lucas Conder the other.

The three drivers then figured in the top three in the final with Bourke eventually wearing down Lepoidevin finding his way through a gap at turn two and never looked back. Conder finished third with Ricky Ashmore and Tim Hutchinson rounding out the top five. For Hutchinson his result meant he had finished in the top five of two divisions for the night.

The Marsh Modifieds a local class in the area made the most of their track championship and Garry Kakoschke and Stewart Knight looked the most likely winners. However mechanical drama put an end to Stewarts run and his car found a home in the middle of the track to watch the race unfold.

Coming through the field Greg Knight was sensational as he found his way around on the high line picking off competition. He caught and blew by Kakoschke who just couldn’t run with Knight as he closed out a great win. Dale Kakoschke was to finish in third with Justin Bradley and Aaron Bunton rounding out the top five.

Redline Raceway return on May the 20th for the running of the Queen of the Mount feature event for Ladies Street Stocks and a Junior Sedan Piston Cup feature to close out the season.