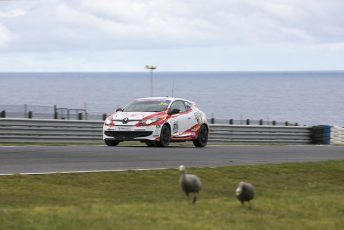 With 120 points available across this weekend’s two 300km races at Wakefield Park, the championship could go to either Osborne Motorsport racer.

“Tyler is not only very talented in terms of driving talent, but he also has the right attitude to things. His ability to provide feedback to the crew has gotten better and better during the year. He listens to what we ask him to do and goes and executes that extremely competently – he has done a great job,” Osborne said.

“No racing driver ever races to come second – in my opinion if you start thinking about that then it is time for you to give up! Having said that, I will be very pleased irrespective of how things pan out as far as myself winning the title – both cars will be running to try and win, and with all things being equal either car is in with a great chance.

“Aside from do not crash into each other, there will be no team orders!”

For Everingham, who has also been competing in the Formula 4 series this year, says he is looking forward to the challenge this weekend.

“It has been a great experience and has helped speed up my progression this year with competing in the Osborne Motorsport Renault Megane alongside the Formula 4,” Everingham said.

“It has been challenging adapting between the different vehicles and characteristics of each car and changing driving styles throughout the season. It has been great working with Colin and the Osborne Motorsport team.

“It is always nerve wracking going into the final round that will be the title decider, let alone battling against your team boss. Throughout the series it has been an extremely enjoyable and close battle between the two Osborne Motorsport entries.

“It is definitely a great advantage leading the championship heading into the final round and helps take the edge off the nerves.

“Having said that, motorsport tends to be very unpredictable and can change at any given moment – whichever way the championship falls it will be a well-deserved victory.”

No matter the battle for the top spot, Osborne Motorsport will claim the trifecta of 1, 2 and 3 in the Class C standings at the close of this weekend – a fantastic comeback after what has been a difficult few seasons for the long-time production racing outfit.

“From a team owner perspective, you want to make sure we get a good result and one that is a credit to the crew who actually make the thing work and who do all the prep on the car and work on the weekend. That is the most important thing, that they are rewarded for their efforts as a lot of what they do behind the scenes doesn’t really get recognised often,” Osborne said.

“We had a lot of set-backs for a while there and it is really good for us to be in the position that we are – our drivers are 1, 2 and 3 on the points and to be heading to the final round in this position is very rewarding.”