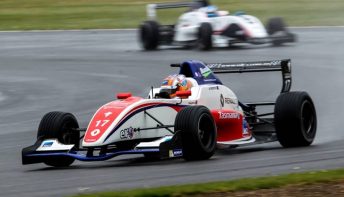 Alex Peroni had a second successive promising Saturday and a disappointing Sunday in Round 2 of the 2017 Formula Renault Eurocup Series at Silverstone.

As in the opening round at Monza, the 17 year-old Tasmanian qualified strongly to start sixth of the 30 drivers in the first of two races at the British Grand Prix circuit.

In a typically rough-and-tumble affair, he maintained his starting position to repeat his Monza achievement of highest-placed Eurocup debutant.

His fastest lap in the race was second only to winner Will Palmer’s.

He was on the pace in qualifying until the final minutes, when the chequered flag waved just before he crossed the Start-Finish line, denying him a crucial last lap on the rapidly drying track.

From his midfield starting position, he suffered a puncture after contact with another driver – co-incidentally the same one he clashed with in a race-ending tangle in the second race at Monza!

At least this time he was able to drive back to the pits for a replacement tyre, and although he rejoined last he regained seven positions in the closing laps.

Despite finishing only half of the four Eurocup races held so far, Peroni sits 10th and best-placed of the four Australian drivers contesting the flagship Formula Renault international series.

Afterwards he reflected on another promising but ultimately disappointing Eurocup round.

“This was always going to be a tough weekend, being my first time racing at Silverstone,” he said.

“It’s a more technical circuit than Monza, but even though both of Friday’s practice sessions were wet I was happy to set the third-fastest time in the last session.

“Saturday’s qualifying session was tricky on a drying track, so I was satisfied with third-fastest lap in my group, only half a second off the fastest time.

“That became sixth on the starting grid with the two qualifying groups lining up on either side of the grid.

“I lost a couple of places on the first lap, but as the race went on my car picked up pace and I was able to get within reach of the drivers fighting over second place.

“Although there weren’t enough laps left to improve my position, I was happy to set the second-fastest race lap.

“Sunday started badly when I was the first driver in my qualifying group to receive the chequered flag on a drying track.

“I’d been on the leaders’ pace, but missing that last lap put me several positions further back.

“Starting the race 13th meant it was going to be hard to get into the top 10 to score points.

“But that disappeared early in the race when Pedro Chaves hit me from behind, deflating a tyre.

“He couldn’t continue, but my car wasn’t damaged apart from the flat tyre so I drove back to the pits for another one.

“The Fortec Motorsport crew did a great job to get me back into race during the Safety Car without losing a lap.

“Even though the replacement tyre was older than the other three, I managed to make up some places before the end of the race.

“Like at Monza, Silverstone was another case of a good Saturday and a bad Sunday.

“I’m confident that even though this is my first year in Eurocup I can race with the leaders, who are in their second year.

“But it’s so competitive at the front that the smallest problem during a race weekend really costs you.

“In the first two rounds I’ve had some good results and some disappointing ones, but I’ll keep doing my absolute best in every practice and qualifying session and race.

“Thanks as always to Fortec Motorsport and my sponsors Blundstone, RACT, United, Renault Australia and Richardson Devine Marine.”

The 2017 Formula Renault Eurocup continues next weekend at the Pau street circuit in France, followed a week later by the series’ showpiece round at the Monaco Formula 1 Grand Prix.