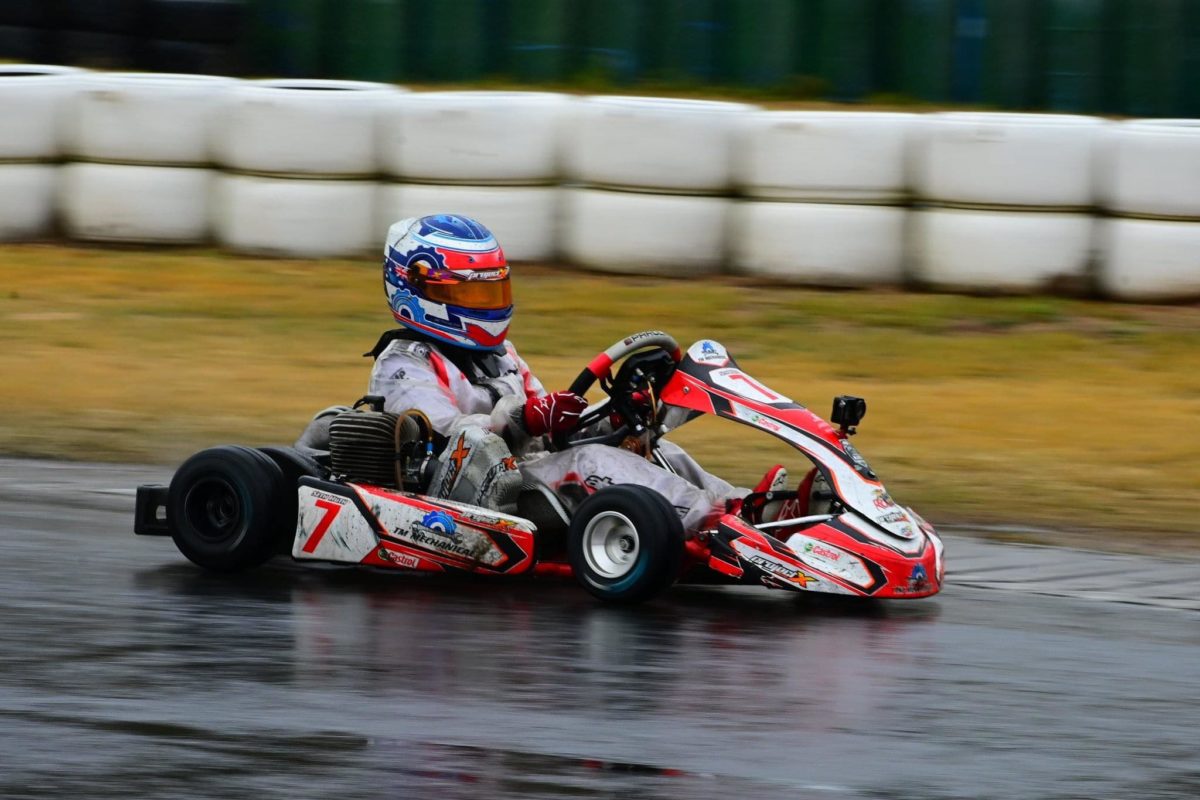 A mammoth twenty-five driver team across nine different classes took on the Queensland Kart Championship for Project X Racing. William Yarwood was leading the large team and they were looking for silverware across a wet and wild Warwick Kart Club. Yarwood not only was running the twenty plus drivers but his team was the naming right sponsor of the titles, making it the Project X Queensland Kart Championship! With Australian Kart Championship round winners Patrick Buckley and Jai Brown leading the team, Project X was in for a fast and furious weekend of racing!

KA3 Senior had a triple driver attack in Australian Kart Championship round winner Jai Brown, lady racer Alice Buckley and Lachlan Platten all taking a start. Qualifying was a hotly contested affair with Buckley landing inside the top five in fifth position. Brown was just a couple of positions back in seventh spot, with Platten just outside the top fifteen in sixteenth overall. All three drivers had strong heats, with Brown never leaving the top ten, Buckley running as high as fifth in heat two and Platten charging into the top five in heat three in a great fight back. Brown led the charge in the final, making his way into the top five and crossing the line in fourth position overall! Platten fought on gamely in the final coming home just outside the top ten in fourteenth position, with Buckley having an unfortunate DNF ending her charge in the final.

TAG Restricted Masters had the dual driver attack in Andrew Torti and Antony Murphy. Torti did a superb job in qualifying putting himself in third spot on the inside of the second row, with Murphy just outside the top ten in position eleven. Torti led the charge in the heats with a fourth in heat one, seventh in heat two and second in heat three. Murphy had a tougher time with two DNF results, but recovered well for eighth in the second heat. Torti did a superb job in the final, challenging for victory at stages but having to settle for the runner up spot in second position. Murphy had an unfortunate DNF in the final after showing excellent pace across the championship.

Riley Le Garde and Scott Gray was the double driver Project X Racing attack on the TAG 125 Heavy class. Both drivers qualified just outside the top fifteen with Le Garde in position seventeen and Gray in position nineteen. Le Garde moved forward in the opening two heats to finish sixteenth and twelfth but a DNF in heat three hurt his final starting position. Gray finished just outside the top twenty in his opening two heats but a brilliant seventh in heat three was the highlight for him. Le Garde was able to make his way back into the top fifteen by the end of the final in position fifteen. Gray was unfortunately involved in an incident on the fourth lap of the final which brought his charge forward to a stop.

Project X Racing had a hand full of drivers in KA4 Junior with SP Tools Australian Kart Championship round winner Patrick Buckley, Ashton Torti, Charlotte Page, Jaxson Fischle and Sebastian Bennett. Buckley set the tone in qualifying for the team in position thirteen. Page was just outside the top twenty-five in position twenty-eight with Fischle, Bennett and Torti in position thirty-three, thirty-four and thirty-five respectively. Buckley had an incident in heat two but a consistent thirteenth in heat one and excellent fifth in heat three had him in contention for the top ten. Fischle, Page, Torti and Bennett all moved forward across the heats with Fischle as high as eighteenth, Page as high as nineteenth, Torti as high as position twenty-one and Bennett entering the top twenty-five in heat two. Buckley was able to make his way into the top ten by weekend close in position ten overall. Page was the best of the rest just missing top fifteen in sixteenth. Fischle and Torti came home just outside the top twenty-five in position twenty-seven and twenty-nine, with Bennett having an unfortunate DNF bringing his weekend to a halt.

Cadet 12 was another Project X Racing class with three drivers in Cruz Patroni, Seth Huth and Hunter Fischle. Patroni and Huth were able to set the tone in qualifying being inside the top ten in position seven and ten overall with Fischle just outside the top twenty in position twenty-one. Patroni led the charge in the heats with a sixth-place finish in heat one. Fischle moved up in the heats with a thirteenth in heat one and three, while Huth had a tough time in the heats with a DNF in heat one hurting his chances. In a fight back from the Project X Racing Cadet 12 team, all three drivers were able to finish in the top fifteen with Fischle twelfth, Patroni thirteenth and Huth just inside the top fifteen!

The fastest class of the weekend TAG 125 Light had Daniel Brown, Jack Stimson and Max Erwin donning the Project X Racing colours. Brown led the charge in qualifying being just outside the top twenty in position twenty-one with Stimson and Erwin not far behind in position twenty-three and twenty-six. Brown was able to move forward across the heats with a nineteenth in heat two and twelfth in heat three the highlights. Stimson was consistent across the heats getting as high as position twenty, with Erwin unfortunately having a horrid run with some DNF’s hurting his chances. Stimson was able to charge forward in the final making his way into fifteen position by the chequered flag. Brown and Erwin both had unfortunate DNF results ending their finals in tough fashion.

The final two drivers to take the track for Project X Racing was Andrew Torti and Robert Mortense in TAG 125 Restricted Light. Torti was able to qualify on the front row of the grid in position two with Mortense right behind in third spot. Torti and Mortense were right in the thick of the battle in the heats with two second place finishes for Torti and a third for Mortense kept them in the top five and podium battle for the final. Both drivers ran inside the top five throughout the final and were pushing hard to try and jump on the podium, Torti led the charge for the team coming home just off the podium in fourth spot and Mortense right behind in fifth spot in a great showing for the Project X Racing team!

Team owner and manager William Yarwood spoke post weekend on the teams racing. “This year’s state title was a first for me on many levels, after attending hundreds of these events over the last thirty-five years this was the first as the naming sponsor. While this didn’t really change our focus it did add to the wonderful vibe our group has to it. We came loaded with a large group under our tents and even more as part of our customer base from our parts sales. We had customers from all over Queensland pitting with us at all different levels of experience. After setup day we were looking forward to what was install as we had a good base to work from however the weather play its part and proved quite difficult as the grime and mess was like we have never seen before. We adapted with Vinnies wash and wax to overcome and get back to conditions we knew. We ended up with a few podiums and bucket loads of goals achieved. Now faced with a enormous amount of cleaning to have done before we head off to Round four of the Australian kart championships in Emerald next week. None of this would be possible with the help of Scotty, TG, and Rainsy and our wonderful customers that make it all worth it”. Yarwood will take and lead his Project X Racing team to the fourth round of the SP Tools Australian Kart Championship at the Emerald Kart Club.