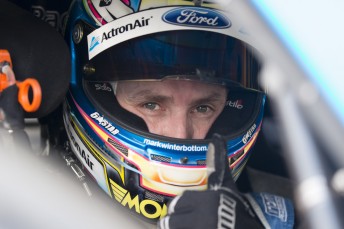 MEDIA RELEASE: Prodrive Racing has announced a new partnership with Australian-owned air-conditioning manufacturer, ActronAir in a deal that will see the brand feature on Mark Winterbottom’s #5 entry for the remainder of the 2015 V8 Supercars season.

The long-time personal sponsor of current championship leader and former Bathurst 1000 champion, Winterbottom, will appear on the front and rear windscreen banners of the car.

Winterbottom is pleased to see the partnership go ahead, with the relationship starting at this week’s Wilson Security Sandown 500, the first event of the Pirtek Enduro Cup.

“It will be fantastic to have the ActronAir logo on the front and rear windscreen banners of my car,” he said.

Team Principal Tim Edwards said the deal highlighted the success of the team and sport as a whole to nurture commercial partnerships.

“It’s great to have ActronAir involved. They’ve been around the sport for a while through Frosty but to have them become part of the team is fantastic,” Edwards said.

“They started small with Mark quite a few years ago and have gradually increased their presence within the sport to a point where they are taking the next step with the team. It proves their investment is working for them, as is being in V8 Supercars.

“Like ActronAir, innovation is a big part of what we do so this new partnership is a good fit.”

ActronAir Head of Sales and Marketing Jamie Mair said that ActronAir is extremely proud of their long standing relationship with Mark Winterbottom.

“We believe we make for a natural fit – two proud Australians that always seek to conduct ourselves with the highest of integrity,” he said.

“The opportunity to extend our relationship to the Prodrive Racing (Australia) team was too good to be missed, and when the opportunity presented itself we grabbed it with both hands.

“Prodrive Racing and ActronAir share a similar vision, one of constant innovation through technology and research and development to stay as leaders in our respective fields. We look forward to partnering together for a successful end to the 2015 season.”

ActronAir was established by Garry Mundy and his two sons, Robert and Kevin, in 1984. Ideas and innovation were key motivators for the family when launching their business and remain the key values of the company today.

The working knowledge vested in the company’s principals, combined with 30 years of research and development, has resulted in one of the quietest, most energy-efficient air-conditioning systems in the world.