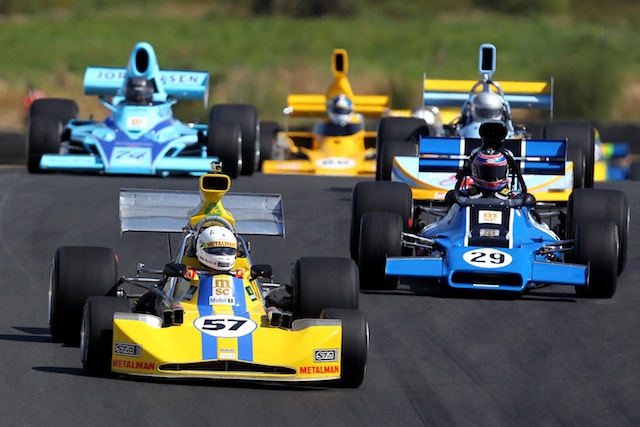 Clark won races and finished second overall in the 2012/13 MSC series, and after mechanical issues de-railed his 2013/14 campaign the talented all-rounder returns with a freshly rebuilt March 73/1A.

Proctor is one of a group of seven New Zealand-based MSC NZ Tasman Cup Revival Series regulars who will take on a similar number of resident Australian drivers in three MSC series races at the annual Historic meeting.

UK-based series’ regular Greg Thornton is also back for the full 2014/15 MSC series with the car he debuted at Hampton Downs last season, a rare Ford V6-powered March 75A.

There will also be considerable interest in the series debut of one of Australia’s category originals, four-time Australian Drivers’ Championship winner Alfie Costanzo in a McLaren M10B.

The Sandown round of the 2014/15 MSC series round is the first of two in Australia, the Kiwi cars being shipped to Sydney later this month for the Historic Sports and Racing Car Association of New South Wales’ annual race meeting at the Sydney Motorsport Park over the November 29/30 weekend.

The first two New Zealand rounds of the 14/15 MSC series will then be held over consecutive weekends at the two Gulf Oil Howden Ganley F5000 Festival meetings at Hampton Downs in mid-January.

The final two will then be held over consecutive weekends in early February, the penultimate one at the annual Skope Classic meeting at Christchurch’s Mike Pero Motorsport Park (nee Ruapuna), and the final at the New Zealand Grand Prix meeting at Manfeild.

Formula 5000 was New Zealand’s premier motor racing category from 1970 to 1975 and the organisers of the Gulf Oil-backed 2015 New Zealand Festival of Motor Racing at Hampton Downs are eyeing a record line-up of local and overseas-based cars.

Close to 300 cars were built to contest the various Formula 5000 (Formula A in the United States and Canada) series around the world between 1968 and 1982 and as many as 60 are expected to line up at the two Festival meetings.