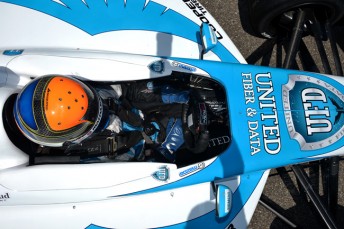 Matthew Brabham suffered a rare mechanical failure at the week-end during the Legacy Indy Lights 100 at Barber Motorsports Park, when his car coasted to a halt just after half way with a suspected fuel pump problem.Having to start 6th in both races, after a few issues in qualifying, was always going to make life difficult on the notoriously challenging track to pass on. But a good start, plus a little luck in turn 1 saw the Andretti Autosport driver exit in 4th place. Despite having a little more speed than those just ahead, the race ran out with no position changes at the front of the field. So Brabs had to be content with some more championship points for 4th place.There was a rush to get race 2 underway as severe weather was fast approaching. This time everyone negotiated turn 1 without any drama, and the pattern of the race was set with the MAZDASPEED / United Fiber & Data #83 maintaining 6th position. Unfortunately for Matthew he was a spectator sitting on a grass bank watching, as the race finished under yellow with heavy rain starting to fall. He was still classified in 12th position, so was able to add a few points to his total but obviously not the result that was expected coming into the event.“I think it was something along the lines of a fuel pump issue because an alarm came up on the dash saying fuel pressure. I’m not sure exactly what happened; the guys will come back and have a look at it. It was just one of those things that happens. I was running in sixth; it would have been good for points, but I think I got over half way to get some of those race points, so it didn’t quite qual ify as a DNF (did not finish) – so that’s good on the positive side. Not such a good weekend for me, but the United Fiber & Data/MAZDASPEED crew is going to be working hard and pushing at it, so we’ll see how we end up in Indy.” Matthew said.Matthew won’t have long to dwell on the disappointment. He has an Indy Lights Rookie test at the famed Indianapolis Motor Speedway this Sunday May 4th, and then the following week-end it’s the next two rounds of the Indy Lights Championship presented by Cooper Tires, at the newly configured Indianapolis Speedway Road Course on May 9/10.