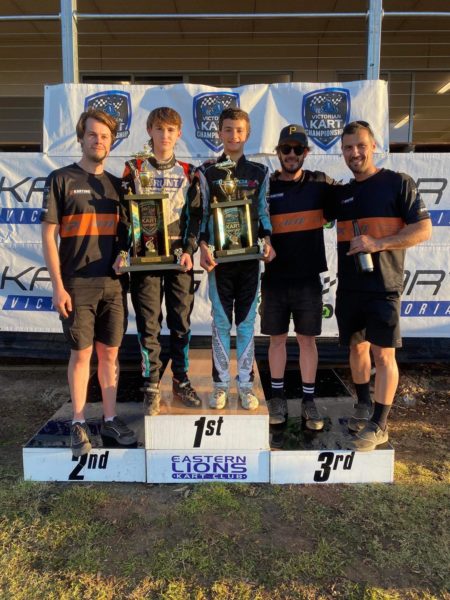 Pro Karting took on the Victorian Kart Championships at the Eastern Lions Kart Club last weekend. An event the team had previously taken victory at, they were chasing more championship glory. A large team of seventeen drivers across eight different classes took to the starter and chased the coveted blue plate!
Jason Pringle led the charge for the team taking on the TAG 125 Heavy class. Pringle qualified just outside the top five in position six but was able to move into the top two across the heats, with a couple of second place finishes. Jason led the championship decider at various stages throughout the race and was able to come home on the podium in second spot!
A large five driver attack took on KA4 Junior Light under the Pro Karting banner in Benjamin Munro, Xavier Avramides, Pip Casabene, Jordan Wickham and George Macmillan. Munro led the way in qualifying, setting the fastest time before unfortunately being excluded from the session. Avramides was able to qualify in position three with Casabene, Wickham and Macmillan in position fourteen, sixteen and twenty-nine overall. Avramides ran inside the top in all heats with Munro charging through the field to finish fourth in the final heat. Munro was able to continue his charge and get up on the podium in second overall, with Avramides in position four making two Pro Karting entries in the top five. Casabene finished just outside the top ten in position eleven moving forward across the weekend. Wickham and Macmillan battled hard over the weekend with position nineteen overall for Jordan and position twenty-two for George in a great showing for the team.
Will Harper was the sole driver in the Pro Karting silks for the TAG 125 Light field. Harper qualified in position ten overall but went up and down in the heat races. A fifth-place finish in heat two showed the pace the young driver had and that he could contest with the best. Will put in an exceptional final performance, moving forward and coming home inside the top five in position five overall!
Lucas Costanzo, Lewis Kucina and Mason Woods were the three Pro Karting entries taking on the forty kart Cadet 12 field. Costanzo led the charge in qualifying setting the best time for the team in position twenty-one. Kucina and Woods were in position twenty-seven and thirty-one overall and were looking to move forward in the heats. All three drivers raced on the edge of the top twenty at stages throughout the weekend. Kucina led the charge for the team in the final coming home in position twenty-one overall. Woods came home just outside the top twenty-five in position twenty-six overall and Costanzo just behind in position twenty-eight.
X30 Light had a two prong Pro Karting attack in Kristian Janev and Declan Somers. Janev and Somers both qualified inside the top ten in position seven and nine respectively. Janev moved forward across the heats to finish the final heat in third spot, with Somers getting as high as position seven in heat two. Both drivers raced hard at the front in the final with Janev leading the team home in position six with Somers not far behind in position eight!
Mark Seddon was the one karter Pro Karting attack on the KA3 Senior Medium category. Seddon did a mega job to qualify inside the top ten in position nine overall. Seddon had an unfortunate DNF in heat one but fought back in heat two and three to be on the edge of the top ten. When looking on for a strong result in the final, Seddon was unfortunately ruled out with another DNF resulting stopping his charge forward.
Domenic Kucina took on the ultra-competitive KA3 Senior Light class for Pro Karting. Kucina qualified in position thirty-one in the forty-kart field and was looking to drive forward. Domenic raced on the edge of the top thirty in all heats with position thirty in heat one his high point. Kucina raced hard in the final and came home just outside the top thirty in position thirty-one overall.
Oliver Wickham, Alexander Yoannidis and Pip Casbene were the final three drivers to represent Pro Karting in KA3 Junior. Wickham qualified on the front row to lead the charge from Casabene in position twelve and Yoannidis in position fifteen. Wickham and Casabene had some rough heats having the pace to be up the front, with Yoannidis moving into the top three by the conclusion of the third heat. Yoannidis hit the front with two laps to go in the final but in the hectic last few laps came home in third spot overall! Wickham came home just outside the top ten in position eleven and Casabene trailing hard in position thirteen!
Team manager Jace Lindstrom spoke post weekend of the team’s results. “I’m extremely proud of all the drivers involved this weekend. We didn’t get the blue plates we were after but we challenged for the win in a number of classes this weekend and came away with three podium finishes. That really shows the depth of our drivers and team resources and knowledge of the team”. Pro Karting will continue to push for strong results for the rest of the 2022 season.