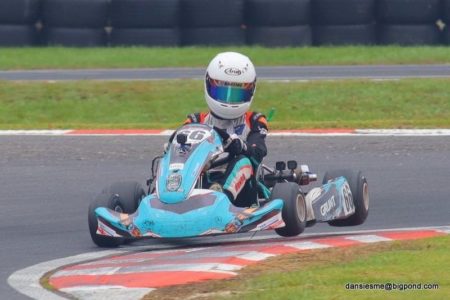 Pro Karting took a team of thirteen drivers across eight classes across to a cold and chilly round three of the Golden Power Series at the Albury Wodonga Kart Club. The team has had a great start to the 2022 series and was looking to continue the strong results at round three. With multiple state and national level caliber drivers, the team was looking forward to the weekend.
Benjamin Munro, Pip Casabene and George Macmillan all taking their spot for Pro Karting in the KA4 Junior Light. Munro led the way putting himself on the front row with Casabene and Macmillan in position four and eighteen. Munro took a third and two heat wins with Casebene running around the top five in all heats, with Macmillan on the edge of the top twenty. In a dominant performance Munro was able to make it three from four race wins and take the round victory. Casabene was able to come home in the top five in position five, while Macmillan had an unfortunate DNF to end his weekend.
Will Harper was the sole Pro Karting driver in the TAG 125 Light category against a quality field. Harper was able to qualify on the second row of the grid in position four overall. Will ran inside the top five in both opening heats but had a DNF in the third heat, hurting his starting position for the final. In a scintillating drive through the field Harper was able to make his way into the top two and challenge for victory. Will was able to cross the line in second position overall and come home on the podium!
Isabella Mayne took on the KA4 Junior Heavy class for Pro Karting in a competitive class pushing twenty-five drivers. Mayne qualified down in position nineteen but worked hard for an excellent recovery, moving forward in all three heats with results of sixteenth, thirteenth and twelfth. Isabella put in another excellent performance in the final to battle hard inside the top fifteen. Mayne crossed the line in position fourteen overall in a great improvement from qualifying!
Benjamin Munro, Alexander Yoannidis and Pip Casabene were back on the track for Pro Karting taking their place in the KA3 Junior field. Yoannids led the charge in qualifying coming home in third spot overall, with Casabene and Munro not far behind in fifth and seventh. Munro starred in the heats making his way forward to third in heat one, second in heat two and a win in heat three. Casabene stayed around the top five and Yoannidis has a rough run with a couple of incidents in the opening heat. In what was a hectic and crazy final race, Yoannidis was able to move his way back up through the field and on the podium in third spot! Casabene was able to come home in eighth spot with Munro right behind him in position nine overall with all drivers coming home in the top ten.
Sebastian Perrone and Mark Seddon took their place on the grid in TAG 125 Restricted Light in the Pro Karting colors. Perrone was able to come away with pole position for the heats, with Seddon not far behind in position five overall. Perrone came home with a win and second in the heats while Seddon was battling on the edge of the top five. In a great and tough final both drivers came home inside the top five with Perrone in fourth spot and Seddon in fifth position!
Lucas Costanzo was the youngest driver for the Pro Karting team running in Cadet 12. Lucas put himself on the front row of the grid in the near thirty kart field and then put in some superb heats. Costanzo put a third in heat one, fourth in heat two and second in heat three putting himself off the front row of the grid for the final. Unfortunately, Lucas was out of contention at the very first corner after being run off the circuit in a tough blow.
TAG 125 Restricted Heavy had the three drivers challenging for victory in the Pro Karting team in Julijan Karlusic, Scott Rundell and Lucas Perrone. Karlusic set the tone qualifying in third spot with Perrone in seventh spot with Rundell down in nineteenth. The drivers had mixed results in the heats but Karlusic was able to come away with a second and fourth grabbing some valuable points for his starting spot. In a hectic final Karluslic and Perrone were both involved in incidents resulting in DNF finishes. Rundell was able to come through and move his way up to position seventeen overall by the flag.
Jason Pringle was the final driver to take to the track in the TAG 125 Heavy class. In a dominate display Pringle was able to take out pole position in qualifying and all three heat wins. Pringle was able to continue on and take out a clean sweep and another victory for the Pro Karting team.
Team manager Jace Lindstrom spoke post weekend on the team’s weekend of racing. “This weekend was great for all our drivers. We put a number of drivers on pole position and came away with victories and podiums. Everyone improved over the weekend and adapted to the fantastic Albury Wodonga Kart Club circuit”. Pro Karting will be back at the track this weekend taking on round three of the SP Tools Australian Kart Championship at the Eastern Lions Kart Club.