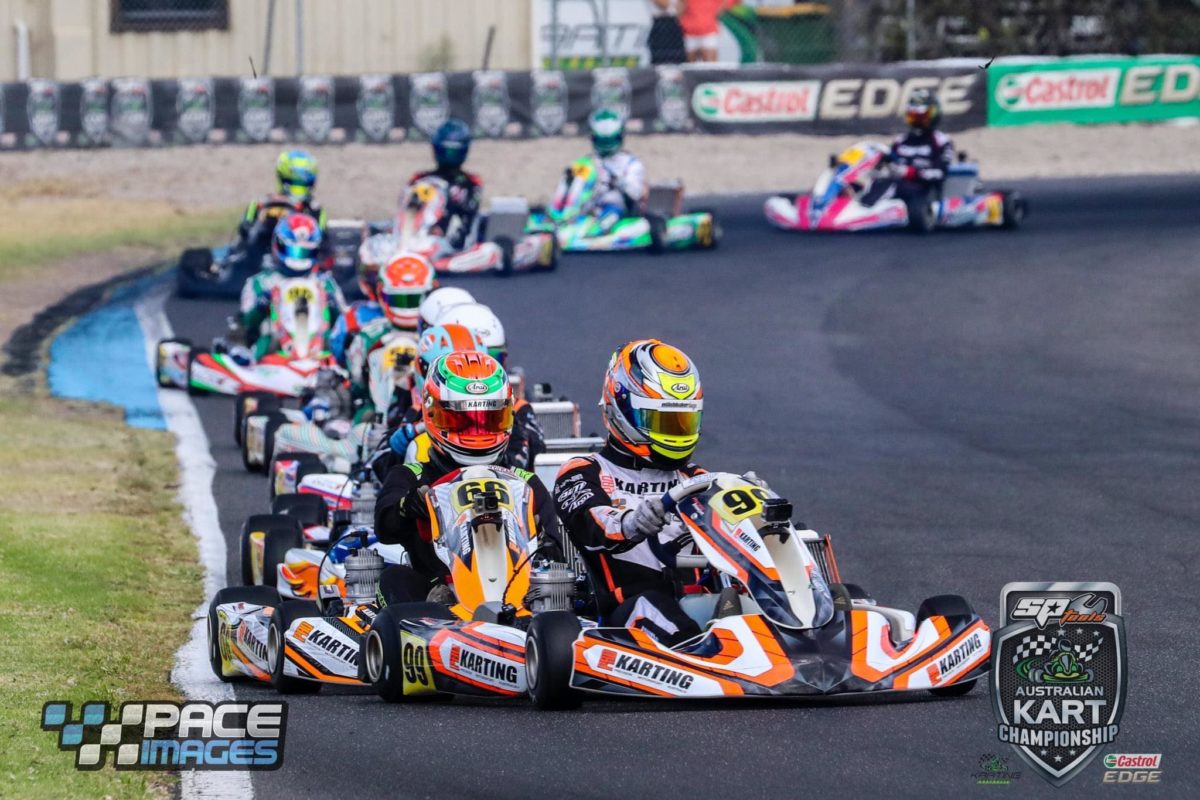 Pro Karting took a team of eight drivers across five classes to Todd Road over the weekend for the opening round of the SP Tools Australian Kart Championship. Being one of the longest serving stables in the Karting Australia ranks, the team were looking to get their championship started well in their home state!

Pip Casabene and Jordy Wickham were the two KA4 junior drivers flying the flag for the Pro Karting team. Casabene did a great job putting his Pro Karting entry up on the second row of the grid in fourth. Wickham qualified inside the top fifteen in position fifteen looking to move forward. Saturday’s three heats were a great start for the team with Casabene never leaving the top four and coming home in third in the second heat. Wickham moved forward as high as twelfth in one of his heats continuing the strong start to the weekend. Sunday didn’t quite go to plan for the two drivers with Casabene dropping outside the top ten in heat four in twelfth and finishing the final in position thirteen. Wickham had a DNF result in heat four but fought back well in the final finishing just outside the top fifteen in position sixteen. Both drivers showed they have what it takes to match it with the best in the country.

Oliver Wickham was the sole driver for Pro Karting in the premier Junior class KA2. The class was split into two divisions due to the size of the field and entries. Wickham qualified down in position thirty nine in the large field but only eight tenths off pole position in the competitive field. Wickham had a great opening heat moving up to position thirteen in his split heat and grabbing valuable points to his attempt to make the main final. Wickham was involved in an opening lap incident in the second heat resulting in a DNF. Wickham did an awesome job in the remaining two heats to recover his way back into the top ten and make his way into the final field! Unfortunately, another incident in the final put pay to Wickham’s charge resulting in a DNF result. Wickham will be one to watch at the next round of the championship.

Lucas Costanzo was the youngest driver in the Pro Karting fold racing in the competitive Cadet 12 field. Costanzo put in a blistering qualifying effort landing in position eight inside the top ten. Lucas had two seventh place finishes in his opening two heat races, really showing he can mix it with the best in the land. A DNF result in heat three hurt his chance for Sunday starting down the order. A position twenty in heat four and position twenty five in the final was a disappointing end to Costanzo’s charge. The young driver will be one to watch in 2022.

Ashton Cattach was another sole representative in an over subscribed class, this time in KA3 Senior. Cattach qualified in the top fifty percent of KA3 Senior in position twenty three and looked to move forward across the weekend. Ashton had steering dramas across his heats but gained enough points to getting himself into the main final with thirteenth his best result in heat two. Cattach was unfortunately involved in an opening lap incident in the final putting him to the rear of the field. Ashton crossed the line in position twenty seven overall showing he had pace across the weekend if luck went his way.

X30 Light had the biggest field of Pro Karting drivers with Declan Somers, Will Harper and Ryan Cook all taking their place. Somers lead the way in qualifying, putting himself in position seven in the over subscribed field. Harper made the top twenty in position eighteen and Cook was down in position thirty eight. Somers and Harper were the stars in the heats both running inside the top ten with Somers coming away with a third in heat three and Harper a fourth in heat four. Cook moved forward in every heat coming home inside the top fifteen in fourteenth in heat three and four. The final didn’t quite go to plan for all three drivers with Harper down in seventeenth, Somers twenty first and Cook in position twenty five. All three drivers made great progress over the weekend and will be looking to rebound next round.

Team manager Jace Lindstrom spoke about the disappointment of Sunday after having good pace all weekend. “A positive weekend for all our drivers. Sunday’s results didn’t reflect our speed and consistency we showed on Friday and Saturday but that’s racing. We have come away with plenty of top 5 results in the heat races from a number of drivers. We will debrief and work hard at turning them into final results for round 2 in Bolivar”. Pro Karting will look to next round of the SP Tools Australian Kart Championship to turn up the heat in Bolivar.