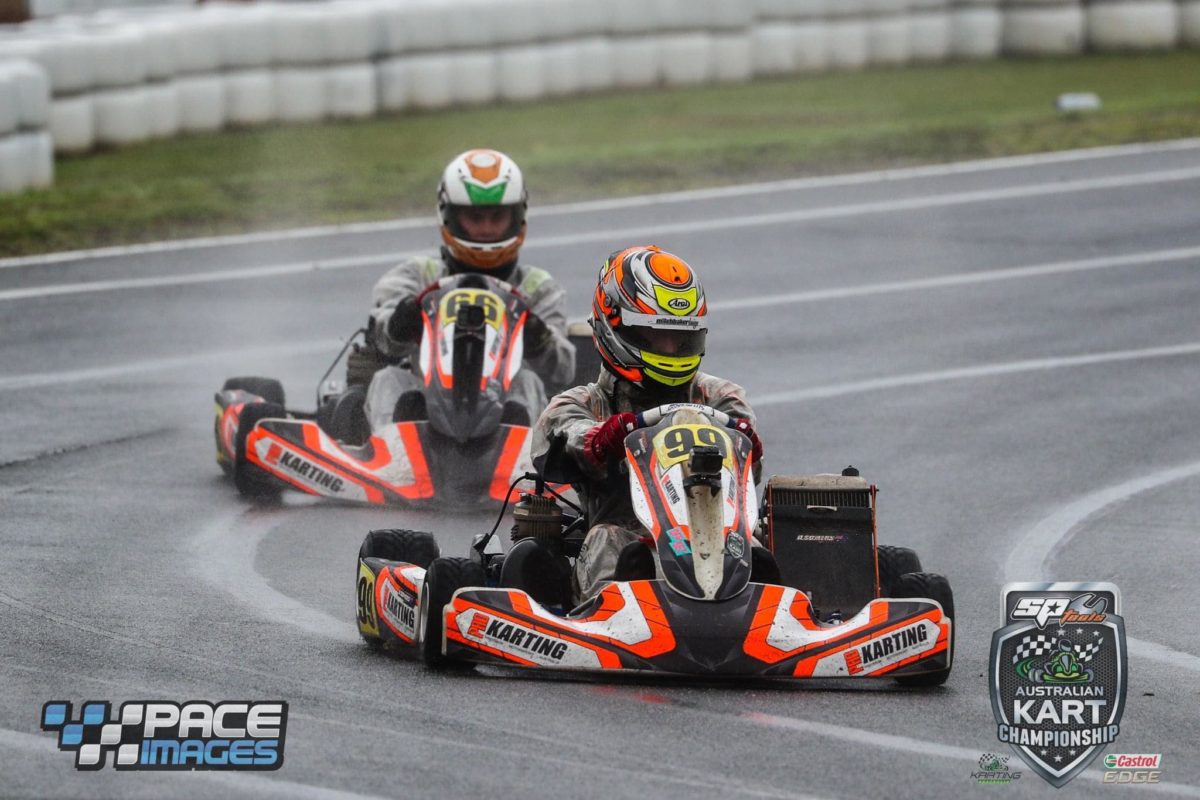 Pro Karting took on the third round of the SP Tools Australian Kart Championship over the weekend. Running at the Eastern Lions Kart Club where the team has had much success at over the years, Grant, Jace and Adam Lindstrom were looking at leading their drivers to strong results. With a team of nine drivers across four classes, the team were ready for a block buster weekend of racing.

KA4 Junior had a triple Pro Karting attack in Benjamin Munro, Xavier Avramides and Pip Casabene. Munro lit Saturday morning qualifying alight taking pole position by a massive six tenths of a second. Avramdies was just outside the top ten in position thirteen, with Casabene not far behind in position eighteen. Munro was the star of the heats taking out three heat wins and a second. Both Avramides and Casabene were able to move forward as the heats went on with a sixth and eighth for Avramides and a sixth and fourth for Casabene. Munro was right in the fight for victory in the final but came away with a valiant second place taking his second consecutive podium of the series. Casabene and Avramides put in excellent drives in the final with Casabene coming home inside the top ten in position eight overall and Avramides not far behind in position eleven.

Ryan Cook was the sole Pro Karting entry in the TAG 125 field of near forty drivers. Cook set a time just outside the top twenty in position twenty one and had the eyes on to move forward. Cook moved forward a total of six spots in the opening two heats. He then continued his progress forward with an excellent twelfth in heat three and fifteenth in heat four. Cook left his best race for last bursting into the top ten and coming home with a strong position nine in the final!

Kristian Janev, Declan Somers and Will Harper all took on the X30 field for Pro Karting. Janev led the way setting the sixth fastest time in qualifying while Somers and Harper were down in position fifteen and thirty respectively. Janev started in an excellent fourth in heat one but had a couple of incidents in his other heats that put him down the order. Somers and Harper both charged through the field with an excellent fifth and seventh in heat two and four for Somers while Harper moved on the edge of the top fifteen in heats two and three. All three drivers were able to finish the final in extremely tough conditions with Somers and Harper coming home inside the top ten in position eight and nine respectively. Janev was just outside the top ten in his move back through the field in position eleven overall.

Marco Manson and Miles Baker were the youngest drivers for the Pro Karting team taking on the Cadet 12 category. Manson was able to place himself in the top ten, setting the seventh fastest time with Baker just outside the top thirty. Manson exceled in the heats taking home a win, two seconds and a fourth having him right in contention for the final. Baker was able to move forward in every heat and placed an excellent fourth in heat three and fifth in heat four! The final brought tricky conditions with the rain starting to come down just before the gate opened. Both drivers were able to finish the final with Manson coming home in position ten overall with Baker not far behind in position eighteen!

Team manager Jace Lindstrom spoke post weekend of the great weekend of racing. ““It was a very successfully weekend. We claimed pole positions, fastest laps and heat wins with our nine drivers. We walked away with another podium with Ben Munro after dominating all weekend and now have the championship lead. We also proved that our material in the FK monster chassis is a leader in the cadet class with Marco Manson from New Zealand winning heat races who was run by Josh Hart from Hart Kart produced by the IPK brand. A very solid weekend by all our drivers in X30 with all three of our drivers inside the top eleven in the final. We will now focus on round four at Emerald where we had some great success there last time we raced at the circuit”. Pro Karting will make the trek to central Queensland for round four of the SP Tools Australian Kart Championship.