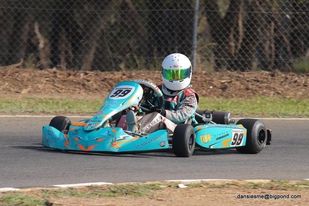 Pro Karting took a team of eleven drivers across seven classes to Bendigo over the weekend to compete in the Victorian Golden Power Series. The team had multiple drivers who showed excellent pace at the ultimate round looking to continue on from their strong start to the series. With drivers as young as Cadet 9 to senior drivers, Pro Karting was ready to make their stamp.

KA3 Junior had young drivers Pip Casabene and Oliver Wickham taking their place for the Pro Karting team. Casabene stole the show in qualifying, taking pole position with Wickham doing a great job to land himself in the top ten of the field. Casabene never left the top two in the heats sharing the race wins with multiple time Australian champion Harry Arnett. Wickham stayed inside the top ten in all of his heats moving up to position eight in the final two heat races. Casabene had an epic battle for victory in the final but came away with a strong podium position in second overall. Oliver Wickham once again showed his improvement moving up to seventh spot by the final not far off the top five.

KA4 Junior Light had the three prong attack for Pro Karting with Pip Casabene, George Macmillan and Jordan Wickham. Casabene took out a strong pole position putting him off the best spot for the opening two heats. Jordan and George both did great jobs also coming inside the top ten, qualifying in position seven and nine overall. Casabene was unstoppable in the heats taking race victory in all three races! Both Jordan and George raced around the top ten throughout the heats setting up for an exciting final. Casabene had karting heartbreak being involved in an incident battling for the lead dropping him out of race winning contention. Pip was able to recover and come home just outside the top five in sixth spot. Macmillan after a few mixed heat results came home just inside the top fifteen, in position fourteen overall. Wickham ran inside the top ten for majority of the final but with a few laps to go was involved in an incident resulting in a DNF finish. The pace of the KA4 Junior Light guys was strong and they now look to the next round.

Will Harper took his place on the TAG 125 Light grid for the Pro Karting team. Harper qualified in position three overall and looked right in the battle at the front. Will was unfortunately taken out on the first corner of the opening heat. Harper was able to recover in heat two for a race win and another strong third in heat three. Will was right in the battle in the final running throughout the top five all race. Harper was able to come across the line in position four overall in a strong result for the team and the driver.

Ashton Cattach led the way in the single kart assault on KA3 Senior Light for Pro Karting. Cattach qualified in position seven overall in a great showing. Cattach ran inside the top ten all weekend, nipping on the heels of the top five. Ashton was unfortunately involved in an incident on the opening lap of the final putting him to the rear of the field. Cattach due to the damage in the incident had to retire from the race after showing strong pace all weekend.

The final driver in the Pro Karting colors was Jesse Watkins in the TAG 125 Restricted Medium class. Watkins did a superb job in qualifying, coming home in the top five and setting himself up well for the heat races. Watkins after coming home seventh in the opening heat unfortunately had damage done to his kart that he couldn’t repair and had to pull out of the weekend.

Jace Lindstrom spoke post weekend of Pro Karting’s weekend. “The weekend went really well for everyone. Again, we have had a number of race wins, pole position and a couple of podiums. Everyone worked well off each other to help everyone improve. It was a great team effort. We now focus of round 2 of the AKC championship where we will be taking 11 drivers and will be pushing hard for podium position. Our team personal is super pleased to welcome Adam Lindstrom back for this event and the remainder of the 2022 calendar to help improve our Coaching structure and grow the team”. Pro Karting will head off to South Australia for the next round of the Australian Kart Championship next weekend.