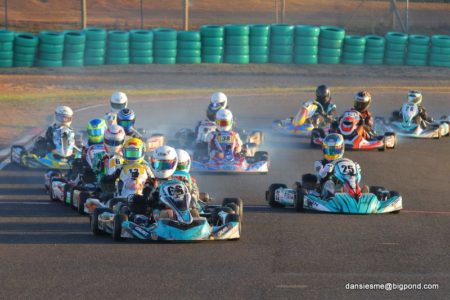 Pro Karting took their biggest team of the season to the fourth round of the Golden Power Series at the Eastern Lions Kart Club, in Puckapunyal, over the weekend.

A massive team of  20 drivers across nine classes took to the track looking for strong results.

With former national champions, Australian Kart Championship round winners and open meeting winning drivers all racing for the team, Pro Karting was in for a massive weekend of racing.

Both drivers were in the hunt for pole in the high calibre field, with Casabene landing inside the top five in fifth spot with Munro right behind in sixth.

Both drivers were able to run inside the top five in all three heats with two thirds and a fourth the highlight for Casabene.

Munro had a pair of top five finishes in the opening two heats but stormed up to second in the final heat giving both drivers a chance at victory.

Munro was able to get to the front in the back end of the final and after a tough and hard fought battle, he was able to take victory and the round win.

Casabene was right in the battle for the top five and came home in credible sixth position and grabbed more valuable points for his championship.

Darsyn Harris was the sole driver in the KA4 Junior Heavy category racing in the Pro Karting colours.

Harris had a solid qualifying landing in seventh position overall.

Darsyn had a tough Saturday afternoon having two DNF results, putting him out of last position for the third heat.

Harris charged up twelve positions in the third heat and moved up to eighth spot.

Darsyn did a tremendous job to once again race in the top 10 in the final but an unfortunate incident on the second last lap resulted in a DNF finish for the young driver.

Jason Pringle and Ryan Cook were a star duo taking on the TAG 125 Heavy class.

Both drivers were well inside the top ten with Cook setting the fourth fastest time and Pringle not far behind in sixth.

Cook led the way in the heats never leaving the top five with a strong second in heat one, third in heat two and fourth in the final heat.

Pringle had an incident filled opening few heats, with a DNF in Heat 1 and an incident putting him down the order and recovering for ninth in Heat 2.

Pringle was able to make his way back inside the top five in the final heat putting him further up the grid for the final.

Cook and Pringle were both able to put in strong drives in the final moving up the field.

Torcasio had a tough Saturday qualifying down in thirteenth and finishing outside the top fifteen in sixteenth in his opening heat.

Max bounced back in heat two and three with two top ten finishes in eighth and ninth overall.

In a scintillating drive forward, Torcasio was able to move up the field once again and come home with an unexpected podium in third spot.

Munro led the way in qualifying putting his entry on pole position, with Casabene also inside the top three.

Yoannidis was just behind him in fourth spot, with Mayne just outside the top fifteen in position seventeen.

Casabene had a tough opening few heats but bounced back up to sixth spot in the final heat, while Mayne raced on the edge of the top fifteen in her heats.

Yoannidis, Munro and Casabene were all in the front group battling for victory.

Yoannidis and Munro were able to come home on the podium in second and third overall.

Casabene was right behind them in an excellent fourth with Mayne continuing her consistency across the weekend in position eighteen overall.

Lucas Costanzo and Mason Woods were the youngest drivers representing the Pro Karting team in the Cadet 12 category.

Costanzo did a brilliant job in qualifying setting the third fastest time, with Woods just outside the top ten in position fourteen.

Costanzo continued his brilliant results in the heat with a second in Heat 1, first in Heat 2 and third in Heat 3  having him off pole position for the final.

Woods had a poor opening heat dropping down to position nineteen, but recovered dramatically to finish ninth and sixth in his remaining two heats.

Costanzo was right in the battle for victory, with any of seven drivers battling at the front.

Costanzo was able to come home with a credible fifth position in a tough battle to the end.

Wood unfortunately had a DNF result in the final ending his charge for the weekend.

TAG 125 Light had Will Harper and brothers Kristian and Lukas Janev putting in a triple threat effort for Pro Karting.

Harper led the way in qualifying with fifth overall.

Kristian Janev was right behind him in sixth overall with Lukas Janev down in 18th on his return to karting.

The heats were mixed for the three drivers with Harper setting the tone with a heat win and a strong third.

Kristian Janev had two DNF’s on Saturday putting him down in 24th but he was able to move up 13 spots in Heat 3.

Lukas Janev stayed out of trouble and moved forward with excellent pace to have three top 10 finishes.

Harper was battling hard in the front group in with a live chance at victory.

Harper came home on the podium in a strong second place with Lukas and Kristian both coming home inside the top 10 in position seven and eight overall.

Sebastian Perrone and Mark Seddon were another two driver line up for Pro Karting, this time in the TAG 125 Restricted Light.

Both drivers put themselves right at the front of the field, with Seddon setting the fourth fastest time in qualifying with Perrone right behind him in fifth.

Perrone led the way in the heats with a second place in Heat 2 and fourth in Heat 3.

Seddon had a fifth and sixth but a DNF in the second heat hurt his starting position in the final.

Perrone put in a stellar drive in the final to come home with another podium for the team in second spot.

Seddon was just off the podium steps, fighting back to fourth place in the final.

All three drivers qualified inside the top six with Karlusic in second, Watkins in fourth and Perrone in sixth spot overall.

The heats were mixed results for the team with Watkins and Karlusic both having DNF results.

Watkins and Karlusic were able to rebound to a sensational result in the final, with Watkins taking the win and Karlusic making a one-two finish for the team.

After showing excellent pace all weekend, Perrone had an unfortunate DNF bringing his charge to a halt.

“This last weekend was super successful, Eastern Lions Kart Club’s track is a circuit that we focus a lot on and it showed in our results which is very rewarding,” Lindstrom said.

“To get nine podium finishes is a great achievement.

“It was also great to see that the X30 engine tuned and built by us filled five of a possible nine podium places in the restricted classes and three of a possible six in the TAG classes.

“So as team and an engine building service it was very successful.”

Pro Karting will be heading to the sunshine state this weekend, taking on the fourth round of the SP Tools Australian Kart Championship at the Emerald Kart Club.