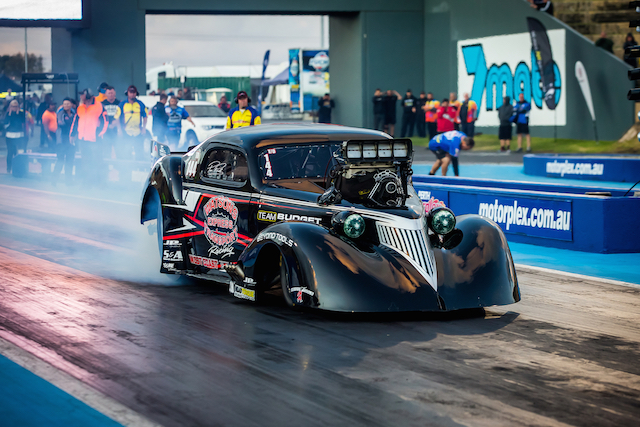 Pino Priolo ended the dominance of John Zappia, knocking him out in Nitro Slam’s first round of eliminations. pic: Phil Luyer

Priolo knocked out the eight time Australian champion on a hole shot win in the first round of eliminations, the upset of the year courtesy of eighth qualifier Priolo’s slower 6.074-seconds/384.06km/h pass aided by his superior 0.062s reaction time in his black ’37 Chevrolet Coupe.

“It was like taking Mohammed Ali down – he’s the best and I really had to be on my game,” Priolo said.

“I knew it would be won on the tree, and that’s exactly how it panned out. The car ran beautifully, I hit all my shift points.

“Once I had the jump on him, I knew I could hold on. I glanced to the side and I saw he wasn’t there.”

In the other Pro Slammer pairings, Peter Kapiris defeated Gary Phillips, Grant O’Rourke beat Daniel Gregorini, and Mark Belleri bounced back from his Sydney accident in the Holden Trade Club Monaro by taking out Pat Carbone.

In Top Bike, Benny Stevens, Christ Matheson, Greg Durack and Mark Drew all won their first rounds before the rain set in.

The Nitro Slam semi-finals and finals will be run when 400 Thunder returns to the Perth Motorplex for the Westernationals, held February 5-6.