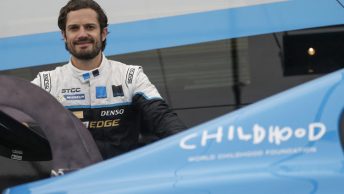 MEDIA RELEASE: Prince Carl Philip will start his fifth racing season in 2017 for Polestar Cyan Racing in a new programme for the endurance series Swedish GT.

“I am delighted to continue racing in Sweden with Polestar Cyan Racing, the past four seasons have been eventful and very rewarding,” said Prince Carl Philip.

“I have raced in Swedish GT previously and this is a format that I very much enjoy.”

Swedish GT runs together with the Scandinavian Touring Car Championship for five race weekends in Scandinavia where Prince Carl Philip will drive a Volvo S60 Polestar in the fastest class GTA.

Prince Carl Philip last raced in the 2012 Swedish GT season where he finished fourth overall in the GTB class.

“Swedish GT is a fine solution for us to maintain our motorsport activities on our home market,” said Alexander Murdzevski Schedvin, Head of Motorsport at Polestar

“The new format of endurance racing will mean a new challenge for Prince Carl Philip and the team to adapt to, something we have full confidence in them succeeding with.”

“We are delighted to have Polestar Cyan Racing in Swedish GT. The decision to introduce these rules was made together with the teams and it is a similar setup to several other championships around the world and actually a form of racing that this car was constructed for originally,” said Jonas Lundin, Managing Director of STCC AB.

This will add further excitement to Swedish GT and continue to be a strong part of the STCC race weekend package.”

The race format of Swedish GT consists of two endurance races per weekend where Prince Carl Philip will drive alone in the shorter race and share car with another driver of Polestar Cyan Racing that will be announced in due course.