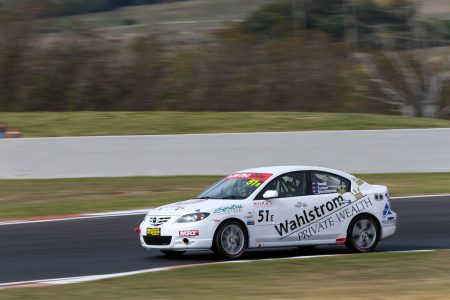 Queensland-based Prime Motorsport will make its debut in the MRF Tyres Australian Production Cars next week (August 2-4) ahead of a full two-car 2020 campaign in the category.

The team from the northern Gold Coast will field the Wahlstrom Private Wealth/ Professional Lending Solutions Mazda 3 SP23CC in Class D at next weekend’s third round of the 2019 APC season, to be held at Queensland Raceway.

Team boss and driver coach, Chris Holdt, explained that next weekend’s event will hopefully be a successful pre-amble to his team taking on the entire APC calendar in 2020 with not just the Mazda 3 but also a new Class C car which is currently being built.

“This will be our only APC round this year as we focus our energy into building our new car and our resources to compete for the entirety of the 2020 season with a two-car team,” Holdt said.

“Next weekend I will be driving alongside local 18 year old young gun Tom Needham of Tom Needham Racing. Tom is a third year apprentice mechanic and competes regularly in the Queensland Track Attack Excel Series and I think we can achieve an excellent result at QR.

“For next year, Tom will be taking on the role of our lead driver for the entire APC series in the Mazda 3 as I focus on the new Class C car. As such we are currently looking for a co-driver for Tom for next year’s series and with some exciting young talent already showing interest we hope to have that locked down by the end of this year.

“It is a very exciting prospect for us to be looking ahead to next year – the professionalism, quality of racing and the added carrot of the MRF Tyres Team Award has enticed us to the MRF Tyres APC and we hope to be a consistent finisher in 2020. We won’t just be running a two-car team either, we will also be offering the services of running and engineering other competitors’ cars and/or teams.”

While the team might be relatively new on the Australian production car circuit after joining the Queensland Touring Car Championship and the Bathurst 6 Hour earlier this year, the outfit is well-known in New Zealand which is the homeland of many of its members.

“Our team is mostly made up of Kiwis, although we have a couple of token Aussies thrown in too,” Holdt laughed.

“We are relatively new to the production car ranks in Australia but have long had ties to the NZ Production car scene. Although we have been mainly competing in the Queensland Touring Car Championship of late we do also have cars running in Open Sports Car Racing in the south Island of New Zealand.

“It was competing in the New Zealand Endurance race series for a number of years that eventually lead our interest towards the Bathurst Six Hour, and so we purchased our Mazda 3 for that race – where we took out a podium in class – and now here we are.”

Prime Motorsport and the rest of the APC field will contest two 300km races over the August 2-4 weekend, including the infamous Fight in the Night race under lights on Saturday evening. For more information, visit www.australianproductioncars.com.au