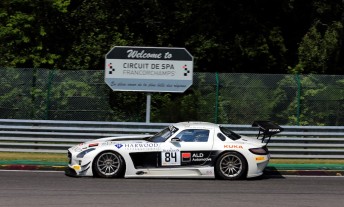 Harold Primat is confident of claiming a top-three result in the 24 Hours of Spa next weekend (July 23-27), as Belgium’s iconic venue hosts 2014’s fourth Blancpain Endurance Series round.

For his second crack at the world’s most prestigious GT event, Primat will once again share HTP Motorsport’s #84 Pro Cup-entered Mercedes-Benz SLS AMG GT3 with Nico Verdonck and racing legend Bernd Schneider.
Following a season-best fourth place at Paul Ricard last month, Primat is hopeful of securing HTP’s second consecutive podium finish in Belgium’s twice-around-the-clock epic.
Needless to say, Schneider’s experience will be crucial, with Mercedes’ star playing a major role in the German squad’s Spa triumph last year.
The official 24 Hours of Spa Test Day on July 2 did nothing to quash Primat’s optimism after HTP’s experienced line-up perfected their set-up and finished an encouraging fourth quickest.
The Swiss ace will be hoping to replicate his 2013 form on the Ardennes’ famous 4.352-mile circuit, where a stunning recovery from 30th to fourth capped one of the Geneva-based driver’s best career performances.
Currently occupying sixth in the Pro Cup standings, Harold is eager to seize his opportunity to take a step forward next weekend. Indeed, Spa’s blue riband event offers almost double points compared to regular Blancpain Endurance Series rounds, while also rewarding consistency by granting points at six and 12-hour intervals.
“The 24 Hours of Spa remains a tough race in which you face fierce competition,” says Primat.
“However, we have all the ingredients to perform well, namely a great driver line-up and excellent car. The Test Day was extremely positive for us, where we were able to make the right set-up adjustments to give us the best chance of challenging for a podium finish. We really have a good shot at securing a strong result.”
The event will also give Primat an opportunity to race on a circuit he is particularly fond of.
“Spa-Francorchamps is a special place; they don’t make them like this any more,” declares Harold.
“Furthermore, the beautiful circuit has always been kind to me since claiming my first Formula 3 win and maiden sports-prototype podium there.”
It also marks the second long-distance race in just over a month for Primat after his Nurburgring 24 Hours debut on June 21/22. However, he’s confident this will prove beneficial.
“These races require specific preparations, meticulous organisation, and a particular mind-set,” explains Primat.
“You need to know how to rest, hydrate, and eat properly, while not exerting excessive energy.
“Although contesting Spa shortly after the Nurburging can be tiring, it helps you get into the endurance-racing groove, while providing a chance to familiarise yourself with specific obstacles you have to deal with in 24-hour races. Perhaps that’s why my finishing record in such events is so high!”