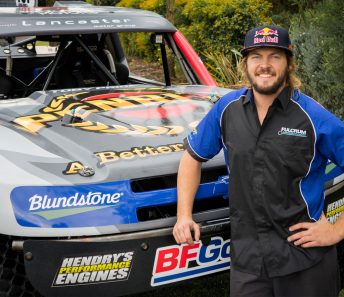 Dakar Rally Champion Toby Price has announced his return to the 2017 Finke Desert Race, where he will this year aim for wins in the Extreme 2WD and Overall categories in his Geiser Brothers built Trophy Truck.

The reigning ‘King Of the Desert’ is unable to compete in the motorcycle category due to injuries sustained to his leg in the Dakar Rally earlier this year.

Price however still remains tied with record holder Randall Gregory for most Finke Titles won in the Motorcycle Category, with 5 wins under his belt.

With Price unable to compete in the 2-wheel category he has since set his sights on racing in the Extreme 2WD Category.

Price is looking forward to racing again following a series of trials and tribulations in the lead-up to the event.

Following the challenges of sourcing a Trophy Truck on Australian shores, Price and his team was able to air freight a Trophy Truck from the United States of America just in time for the Finke Desert Race.

“There’s been a lot of chaos around the Finke Desert Race, the original plan was to ride the bike and drive the truck again but unfortunately my leg isn’t quite ready for the strain on the bike. I didn’t want to miss racing at Finke so we got our hands on a trophy truck out of the United States. It’s been a long process but we’ve put the pieces together, Owlpine group have managed to put it all together for us and fortunately we will get on the start line for Finke on 4-wheels. A massive thank you to all the sponsors that have come on board to make this happen for me.”

Price is now preparing to race in the Extreme 2WD Trohpy Truck Category of Finke Desert Race located in Alice Springs on the 9-12 June.